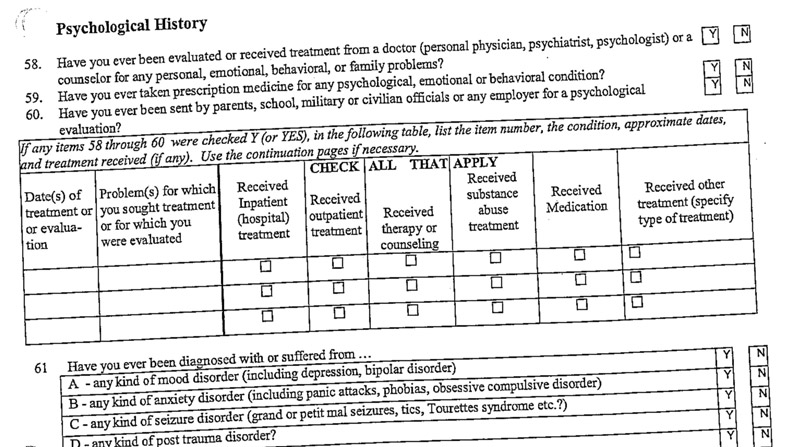 The founder of the psychological risk management firm that has screened the emotional fitness of Suffolk police candidates for nearly two decades cautioned the county in contract documents that such evaluations have limitations.

The screenings, consisting of a two- to four-hour written test and an in-person interview, cannot be used to predict which job candidates could be prone to commit fatal errors, firm founder Anthony Stone said in the county documents.

Citing “limited empirical evidence that establishes relationships between psychological variables in this field and real-world outcomes,” he wrote: “There are no studies of which I am aware that have examined the psychological predictors of ‘bad’ police shootings and few that have identified specific predictors of serious misconduct.”

He also wrote: “Research into predictors of serious, ‘headline making’ negative outcomes is hampered by the fact that catastrophic outcomes are exceedingly rare — which makes finding a statistical relationship between such outcomes and a psychological predictor a near impossibility.”

In grade school and/or high school were you ever placed in special classes for learning or behavioral problems?

Have you ever deliberately bounced a check?

Have you ever illegally possessed a firearm, explosive device or other weapon?

Other than fights in the line of public safety, military or related duty, have you had any physical fights since high school?

Have you ever been sent by parents, school, military or civilian officials or any employer for a psychological evaluation?

Stone, McElroy has divided interviews with Suffolk hiring candidates among members of its staff and two Long Island psychologists who are partners on the firm’s Suffolk contract. They were paid based on the number of assessments they performed, according to the firm’s 2015 proposal to the county.

One of the partners, Helen Stevens, based in Bethpage, was the school psychologist for the 5,000-student Farmingdale school district for nearly three decades until 2014. The website of Teachers College at Columbia University describes her as “a full-time lecturer and Director of Internships and Externships in the School Psychology Program.”

It also states that “she is a public safety psychologist, conducting preemployment evaluations for law enforcement agencies, and a media psychologist, vetting applicants for reality television and cable programs.”

Stevens’ resume, submitted to the county and available on Columbia’s website, says she maintains a private practice that focuses on individual and family therapy and psychological assessment.

The second psychologist, Jennifer Gonder, is an industrial and organizational psychologist and serves as an associate professor of psychology at Farmingdale State University, according to the school website. Her research interests, according to her resume, also submitted to the county, focus on consumer psychology as well as the relationship between instructor and student perceptions of classroom learning.

Stevens and Gonder did not return messages seeking interviews.

Nassau’s Civil Service Commission last year paid six psychologists and three psychiatrists a total of $70,000 to conduct screenings. They recommended against six Black applicants from a maximum candidate pool of 73, representing a failure rate of 8.2% — almost four times higher than a 2.3% disqualification rate for all other candidates combined.

Nassau’s clinicians have websites that offer services such as marital counseling, treatments for anxiety and consulting on the insanity defense in criminal cases.

They rely on a test known as the Minnesota Multiphasic Personality Inventory, which presents test takers with hundreds of statements that require true-or-false responses. The statements extend from “I cry easily.” to “I have a good appetite.” Psychologists weigh the collective answers on scales designed to identify issues such as depression, paranoia and schizophrenia.

One Nassau clinician, Manhasset-based psychologist Marc Janoson, maintains a practice that includes coaching police candidates in how to pass psychological screening, as well as how to appeal disqualifications.

“While the agencies try to be fair, many candidates are psychologically disqualified for no valid reason,” his website warns. “This disqualification will follow the candidate as he or she applies for law enforcement positions in other jurisdictions.”

Janoson, who was paid $13,793 by Nassau Civil Service in 2020, said in a Newsday interview that he has not counseled Nassau police candidates since he began working for the county in the fall of 2019 “because of the obvious conflict-of-interest.”

Most of his clients have sought jobs with the New York Police Department, Janoson said.

“We go over their life history and I help them present it in a way that is not in any way incorrect or dishonest, but a way that puts it in a context,” he said. As an example, he said that a candidate could say alcohol consumption in college was part of “a drinking culture.”

Rudy Nydegger, a psychologist who has done assessments of would-be officers for Albany-area departments, said that “personality tests can be culturally loaded.”

“You have to interpret these tests based on the cultural norms of the people you’re testing, with that person’s background and experience in mind,” he said. “What may look normal in one group might not look normal for another group.”

Psychological assessments of police candidates can be subjective and influenced by cultural experiences, said Adwoa Akhu, a former president of the New York Association of Black Psychologists who teaches New York Police Department hostage negotiators about communication and de-escalation methods.

Akhu said, for example, that a Black man should not be considered paranoid for disclosing past concerns about being followed by police when he hadn’t done anything wrong, because statistics show Black men are policed differently than white men.

“Although these tests and assessments are supposed to be normed and objective, [people of color’s] responses could be outliers,” Akhu said.