Damon Barney doubted the Suffolk County Police Department’s commitment to diversifying its overwhelmingly white ranks even as he recruited minorities to join the force.

“I was living a lie,” the since-retired officer, who is Black, said in a telephone interview from his Delaware home. “You have a Black person as the face of the department telling your lies.”

Apryl Hargrove, who also is Black, holds the rank of officer and has recruited for the department since 2018. Her perspective is different from Barney’s.

“I don’t feel that way,” Hargrove said in an interview at the county police headquarters. “I don’t feel like I’ve been forced to do anything. And I really think this administration wants to diversify.”

Seven Black or Hispanic present or former members of Long Island’s county police forces described serving in the overwhelmingly white departments in conversations with Newsday. Their experiences dealing with the public, colleagues and bosses ranged from disillusionment to pride.

I don’t feel like I’ve been forced to do anything. And I really think this administration wants to diversify. 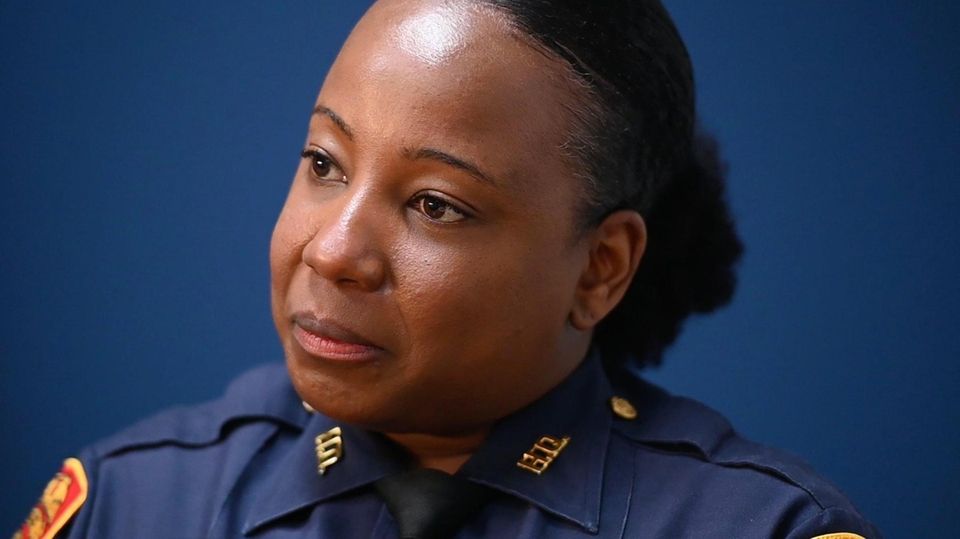 Most acknowledged a divide between many in the minority community and the police.

Suffolk Det. Earl Stroman, a 35-year veteran who encourages minorities to pursue careers with his department, cited his own experience getting pulled over in traffic stops, as well as the experience of his son Marcus, a pitcher for the Mets.

Marcus lived in a predominantly white, upscale Florida community, Stroman said. In 2017, police pulled Marcus over while he was driving there with friends. He was ordered to lie on the ground after he said he was legally carrying a registered gun.

Stroman said he had taught son at a young age how to behave in such a situation. He recalled telling Marcus, “Just make sure you don’t end up being a mistake. Turn your lights on. Let them see your hands. Don’t give him an excuse to pull a gun and shoot.”

Stroman said Marcus called after the incident and was “hot.”

“He said, ‘I complied, Dad, I got on my back, but I was mad, and I stormed face down,'” Stroman recalled. “He said, ‘I told them I’m allowed to have (the gun) here, these are my friends, this is my neighborhood.’ Because where he lives is a mostly white neighborhood that he’s coming through.”

“And I told him maybe it’s because you’re a Black guy driving in a white neighborhood. And does that happen? And does reverse discrimination happen? Of course it happens. It’s part of policing. I hate to say it.”

“So that’s going to make him angry, it makes me angry, I’ve gotten pulled over, you know, and been treated differently, and it’s going to have an outcome that makes him think differently of the police department.”

Everything they’re saying in recruitment, everything that they’re telling the public they want to do, I feel that that’s not really what they want done. 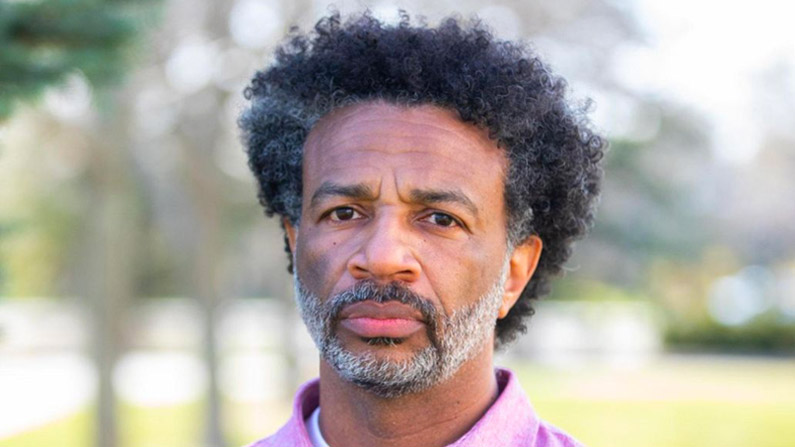 In the 1990s, the Suffolk department assigned Stroman to recruit minorities to join the force. In 2014, Barney took over the same assignment toward the end of his 22 years on the force. He recalled meeting immediate difficulties.

“I had nothing to work with, I was starting from scratch,” Barney said, saying that he was instructed to “go to the mall and hand out flyers” and was rebuffed on traveling to recruit at historically Black colleges.

Early in his tenure, Barney said that he was assigned at the last minute to replace a white colleague at a Wyandanch Public Library job fair, located in a predominantly minority community. He remembered thinking that he was being used for the color of his skin when a boss said that Newsday would photograph him.

“Everything they’re saying in recruitment, everything that they’re telling the public they want to do, I feel that that’s not really what they want done,” Barney said. “And they were using me to get that across.”

Hired in 2010, Hargrove said minorities faced obstacles to transfers and promotions, remembering that “it would be years” before a minority became a detective. More recently, she said, minorities have advanced during Commissioner Geraldine Hart’s administration. Hart resigned in May to become Hofstra University’s director of public safety.

For Solon Parker, a Suffolk narcotics detective, watching the video of George Floyd’s death last summer in Minneapolis alongside white colleagues brought him back to his early days on the force.

“I’ve been a police officer a long time,” said Parker, who was hired in 1986 and remembers indignities. “I’ve seen things, heard comments. You get hardened to it.”

He braced for reactions to the sight of a white officer fatally holding a knee on a Black man’s neck and was surprised that the conclusion voiced by one fellow officer was unanimous: “That’s a murder.”

“I was taken aback,” Parker said. “I didn’t hear anyone try to explain away the officer’s actions. They all agreed this was something egregious. That to me showed the difference in 32 years.”

He added: “When I first took the job, that never would have happened.”

As president of the Nassau Guardians, the county’s fraternal group of Black officers, McCullough presided over meetings that debated how to repair the long-fractured relationship between police and minority communities.

The Guardians submitted a plan to Nassau County Police Commissioner Patrick Ryder that they hoped would help minorities make it through the hiring process at rates closer to their white counterparts.

It called for the department to put the Guardians in touch with minority candidates who passed the written test, allowing Black officers to mentor Black candidates in navigating the demands of the hiring process.

A commanding officer of six units, McCullough said the Guardians plan to address concerns that minority candidates are “lost” at each step toward becoming an officer.

“Many of us were protesters ourselves, because we live in these communities, we understand some of the things that communities are upset about — and we have to work for the department,” she said. “So from looking inside out, who would better be able to give suggestions on how we feel the department could make changes?”

Ryder approved the proposal, and included it in a policing reform plan drawn up in response to Gov. Andrew M. Cuomo’s statewide mandate following the murder of George Floyd last summer.

We have to answer to multiple sides – our blue, our community and our culture. You’re being watched twice as hard and under a thicker lens. 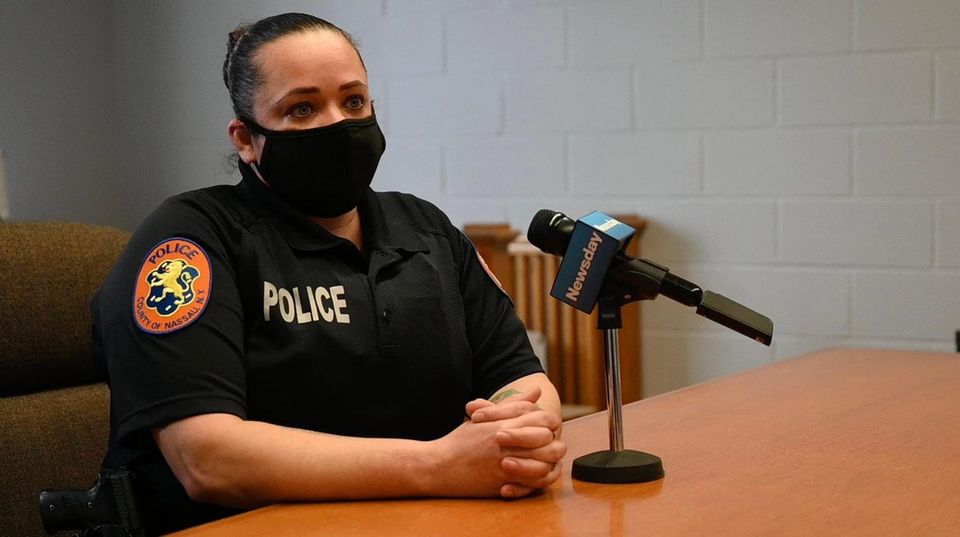 Police officer Victoria Ojeda, who is of Mexican and Puerto Rican descent, said the attention she generates as one of 34 female Hispanics on Nassau’s 2,400-member force is the most challenging part of her job.

“We have to answer to multiple sides — our blue, our community and our culture,” she said. “You’re being watched twice as hard and under a thicker lens.”

Her cultural background hasn’t impacted the job opportunities within the department, she said. She ticked off a number of initiatives she’s involved in, including running a presentation for academy recruits on the need for better cultural awareness. The program educates recruits on issues such as why people immigrate illegally, the difficulties they face and the danger of stereotypes.

“There’s unbelievable pressure to elevate yourself to a standard that nears perfection,” she said, of being a minority on the police force. But she doesn’t view that as a negative. “Many of us take that challenge head on.”

For Jevier Espinosa, being a Nassau police officer gave him opportunities he never thought were possible watching his parents making a living in factories as immigrants from Colombia. His family moved to Queens when he was 6.

Hired in 1997, Espinosa took nearly every promotional exam for which he was eligible. He was made sergeant in 2005, lieutenant in 2015 and captain in 2017. He retired in 2018 as deputy inspector and commanding officer of Nassau’s community affairs division. He was then the department’s highest ranking Hispanic officer.

“I felt anything I worked for and that I wanted, I got,” he said. “Was I lucky? I don’t think so. I think the system is set up to reward you if you work hard and you do what you’re supposed to do.”

Espinosa joined Nassau’s recruiting team of eight officers for a hiring exam administered in 2012. He was eager, given his positive experience in the department. He was surprised by how much convincing minorities needed to take the application compared to whites.

“For every one Hispanic or Black person we got to take the application, it felt like we had to spend an average of 20 minutes talking to him,” he said. Whites who had family members, neighbors or friends on the force needed no convincing, he said.