An eight-person state board appointed by the governor sets the fitness test standards and requires police agencies outside New York City to measure fitness by precisely executed situps and pushups, plus a run. Breaking form can result in immediate disqualification.

The proper form for sit-ups, according to a Suffolk video.

In a notice to municipalities, the Municipal Police Training Council wrote that, while “these elements may not be directly representative of essential job functions to be performed by an entry-level police officer,” they do “measure the candidate’s physiological capacity to learn and perform the essential job functions.”

A spokeswoman for the state’s Division of Criminal Justice Services confirmed the state’s view that pushups, situps and a run demonstrates a candidate’s ability to “safely learn and perform essential job functions of a police officer.”

Both counties describe the test as an agility test. The New York Police Department takes a different approach in what it calls a “job standard test” that is designed to simulate on-the-job challenges.

In addition to climbing a six-foot wall, withstanding the force of a physical restraint system and dragging a 176-pound mannequin 35 feet, candidates must also run up and down six steps of stairs three times, sprint around cones, and pull the trigger of an inoperative firearm 16 times in one hand and 15 times in the other. 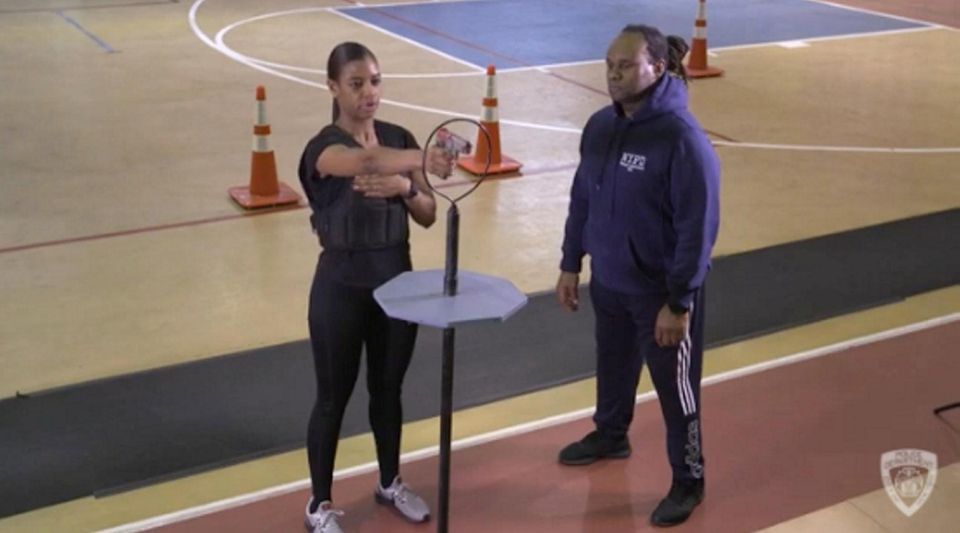 A screenshot of the NYPD jobs standard test explainer video, depicting steps in their version of the physical fitness exam.

They wear a 14-pound weight vest throughout the test and must complete the tasks in 4 minutes and 28 seconds. The standards are the same regardless of age or gender.

On Long Island, under state rules, the required number of pushups ranges from 29 for men who are younger than 30 years old to 11 pushups for women who are 30 years old and above. There is no time limit. Candidates are permitted to stop during the exercise but only with their arms extended and elbows locked.

While in motion, they are barred from breaking a set form. Among the rules: applicants must lock elbows at the top of the pushup, keep backs straight and lower their chests to touch a padded foam block for a repetition to count. Per Suffolk’s video, a momentarily flexed back results in a warning, and a second infraction “terminates the test” in failure. Touching a knee or torso to the floor also fails a candidate.

The situp test is timed. Candidates have one minute to complete repetitions specified for their ages and genders. That ranges from 38 for men who are younger than 30 years old to 25 for women who are 30 years old and above.

Candidates perform situps while on a board with their knees bent and their ankles under a bar. Candidates interlock fingers behind their heads and must keep them fully interlocked through the exercise. If fingers slip apart on a repetition, that repetition is stricken from the count. On the way up, the back must remain straight at all points and elbows must pass the knees. Rounding the back, performing a crunch-style situp or failing to move elbows past knees drops a repetition from the count.

On the way down, hips must remain grounded and shoulder blades must touch the board. Violating either of those standards eliminates a repetition. If a candidate stops to rest during the minute, the test is terminated in failure.

Videos on both counties’ websites lay out what’s acceptable and what’s not.

Former Suffolk Police Commissioner Geraldine Hart said the department is trying to combat the preparation advantage that some candidates enjoy by granting candidates who fail four weeks before retaking the test, up from two weeks. Nassau counts a failure as final.

Alfred Titus, a former New York Police Department hostage negotiator and homicide detective investigator, said he probably would have failed the test when he was in prime athletic shape — unless he had studied the instructional videos.

“It is too strict, there are some things that don’t make sense,” he said, referencing as examples the requirement to interlock fingers behind the head during situps and prohibiting candidates from pausing during the one-minute time cap on situps.

Titus, who is Black, also said that unfamiliarity with the standards places Blacks at a disadvantage.

“The minority communities are not familiar with the requirements and don’t have the tips and inside info from their families,” he said.