Happy Friday from The Point!

Among those getting their first look at the completed renovation of Nassau Coliseum Friday was former Sen. Alfonse D’Amato.

D’Amato, of course, has played an important role in the history of the Coliseum and its surrounding property. He was one of the first to convince former New York Islanders owner Charles Wang to buy the team. But then, after Wang refused to utilize D’Amato’s brother, Armand, the former senator turned on Wang’s massive $3.8 billion Lighthouse Project proposal for the site. Sources at the time said D’Amato’s opposition was key to the project’s ultimate doom.

It may be a different decade and some different players but D’Amato still remains a given when it comes to power plays in Nassau County. Now, D’Amato’s Park Strategies firm counts developer Bruce Ratner, who is overseeing the Coliseum renovation, among its clients, and has represented Ratner and his associates in talks with Nassau County about the Coliseum, sources said.

On Friday, D’Amato told The Point that he hoped the remade Coliseum would lead to “a nice development” on the land, one that could include a housing component and retail shops. And another potential client as well?

The Lighthouse, D’Amato recalled, was “ridiculous” in its size and scope.

And though some still believe his bitter fallout with Wang makes him partly responsible for the Islanders’ departure because of his opposition to the Lighthouse, D’Amato said he was hoping for the team’s return. “It would be wonderful. I hope that’s more than wishful thinking.”

For now, the Coliseum has few signs that it was ever home to the Islanders. There’s no orange and blue in public spaces, and the “home hockey locker room” has lockers painted brown. The only sign we saw that hockey was once played there: Four photos in the basement lobby, showing the team’s Stanley Cup wins.

We had a visitor Thursday 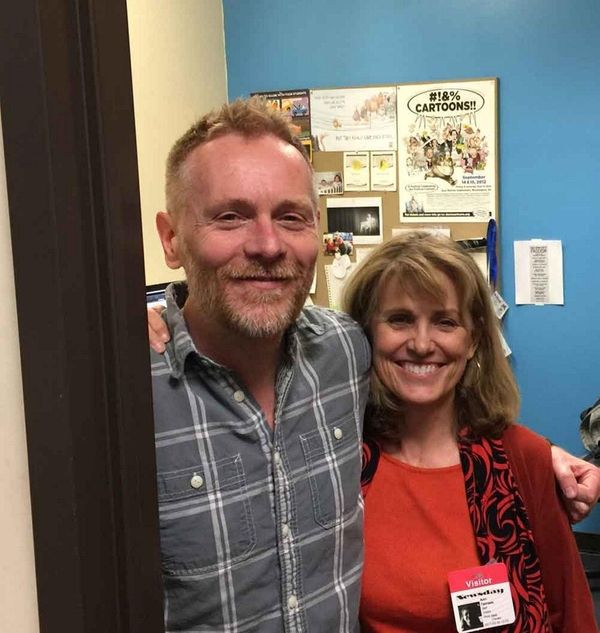 In place of the customary Pencil Point cartoon, here’s a picture of two cartoonists. That’s Ann Telnaes and me (on the left). Ann is a Pulitzer Prize-winning cartoonist who draws for The Washington Post and is the president of the Association of American Editorial Cartoonists. She was visiting Newsday on Thursday to help plan the cartoonists annual convention, which will be hosted by Newsday, Hofstra University — and me — in November. The gathering is officially called “Satirefest,” and in this political era it promises to be quite an event.

Take a look at Matt’s cartoons

The Long Island Association has long been the region’s largest and perhaps loudest business group. The organization and its president, Kevin Law, have significant influence in Albany, and the ear of Gov. Andrew M. Cuomo. But it usually doesn’t address social issues, unless they impact hiring or other business interests.

But this week, the LIA emerged with its first study on poverty, which found that the Island’s poverty rate rose in 2015 to 6.7 percent, the highest level since 1959, when it stood at 6.8 percent, according to the Census Bureau. Meanwhile, the poverty rate has sunk nationally, from 22 percent in 1959 to 13.5 percent in 2015.

So why is Long Island’s biggest business advocate trying to tackle a big social issue like poverty?

Law told The Point in an email Wednesday that half of the LIA’s board members serve on not-for-profit boards, and are “major benefactors” of key causes of these nonprofits, like fighting poverty. Also, the not-for-profit sector makes up about a fifth of the Island’s economy, and is therefore key to the LIA.

Beyond that, Law noted that he’s trying to focus on the Island’s “changing demographics,” in an effort to stop the perception that the Island is entirely wealthy, and to make sure the region gets attention from key federal programs that can address poverty and other social ills.