A police officer swore that a stolen SUV intentionally rammed his car.

Cameras and consequencesA surveillance video casts doubt on the official police account of a collision that started a stolen car chase.

The car chase culminated with officers kicking the handcuffed suspect in an episode recorded by a police body camera.

In March, the department suspended two officers for committing the apparent beating and placed three officers and a supervisor on modified duty for allegedly failing to intervene. Suffolk County District Attorney Timothy Sini’s office has confirmed it is conducting a criminal investigation of the incident.

Recorded at a Mobil gas station in Coram, the surveillance video came to light after Sini’s office this month dropped assault charges lodged against suspected car thief Christopher Cruz. Officer Frank Filiberto had sworn that Cruz “accelerated and rammed into the front of my police vehicle to evade police contact.”

Filiberto also asserted: “Additionally when the suspect vehicle struck my police vehicle it jolted me and my vehicle. This caused my neck to snap left to right and I struck my head against the side pillar of my vehicle. Shortly thereafter, I immediately felt a radiating pain in my neck and a throbbing headache.”

What the police said 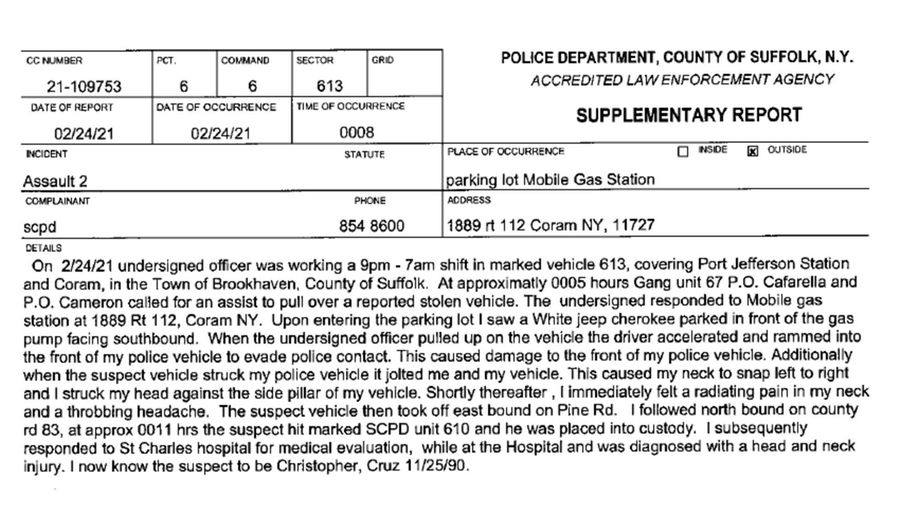 accelerated and rammed into the front of my police vehicle… it jolted me and my vehicle. This caused my neck to snap left to right…

After comparing the events as recorded on the video and as described in Filiberto’s report, three legal experts — a former federal prosecutor, a criminal law professor and a former New York Police Department Internal Affairs Bureau supervisor – saw evidence that the officer filed a false account.

“There’s certainly more than enough probable cause to believe the officer deliberately lied in his statement,” said Bennett Capers, who served as a prosecutor for 10 years in the Manhattan U.S. attorney’s office and now leads the Fordham University Law School Center on Race, Law and Justice.

“Beyond the issue of internal discipline, one question that has to be asked is whether the district attorney’s office is exploring false statement charges against the officer and if not, why not.”

Together, the surveillance and body camera recordings highlight the increasing roles that widespread video recording devices are playing in evaluating questions about guilt, innocence and police accountability.

Based on Filiberto’s account, the district attoney’s office alleged in a felony assault complaint that Cruz “did intentionally strike” Filiberto’s 2017 Ford Explorer SUV while driving a 2015 Jeep Grand Cherokee after midnight on Feb. 24.

“The impact caused substantial head and neck pain as well as a concussion for which PO Filiberto was treated” at Mather Memorial Hospital, the complaint stated.

The surveillance video shows a stolen white Jeep motionless on a concrete apron at the edge of the gas station in Coram. An unmarked police car approaches from the left and stops. The Jeep moves forward, stops and then advances to the right for roughly a car length as Filiberto approaches in a marked police SUV, also from the right. The left front of the police SUV strikes the rear passenger side of the Jeep. The Jeep curves to the left and pulls away with the SUV in pursuit.

“There’s not enough to say definitively there’s a lie here. But there’s enough of a concern that there might be a lie,” said Justin Murray, who teaches criminal law at New York Law School.

Referring to the allegation that Cruz rammed the police SUV, Murray also said, “There’s certainly enough here to create reasonable doubt, so prosecution could not prove that Mr. Cruz intended to ram the vehicle, instead of being rammed by the police vehicle.”

Sini should investigate whether officers lied in statements as well as whether police assaulted Cruz, Murray said.

Keith Taylor, who was an NYPD Internal Affairs supervisor and teaches in the Department of Law, Police Science and Criminal Justice at John Jay College, said of the impact between the stolen Jeep and Filiberto’s vehicle:

“It looks like it’s a light tap. But it’s a distant dark video. So, we’re limited in terms of what conclusions we can make from it.”

In addition to a second-degree assault charge stemming from the alleged ramming, Sini’s office also charged Cruz with resisting arrest, car theft and two counts of criminal mischief for allegedly damaging Filiberto’s car and a second police vehicle at the end of the chase.

On June 2, the DA dropped the assault and resisting arrest counts, along with the criminal mischief related to allegedly damaging Filiberto’s SUV.

New York criminal law experts said that, to win a conviction on the assault charge, the district attorney would have to prove beyond a reasonable doubt that Cruz intended to prevent the officer from performing his duty and caused physical injury to the officer.

Civil rights lawyer Fred Brewington, who gave Newsday a copy of the video, asserted that it shows that statements supporting the assault charge were false. Cruz has filed a notice of claim, a precursor to a lawsuit, against Suffolk County and the police department.

“The police lied,” said Brewington, who is representing Cruz on civil matters. “I think the video is in stark contradiction to the sworn statements given by police that Mr. Cruz rammed the police vehicle.”

Murray said that “people should start getting impatient” for Sini to complete the district attorney’s investigation.

“It’s well past time to be getting more concrete information about what’s happening in the investigation,” he said.

Capers, who had also served as a commissioner on New York City’s Civilian Complaint Review Board, said investigations can take several months. But in this case, he said, “there’s videotape evidence, everybody’s identified – it doesn’t seem like that complicated a case.”

Suffolk police accounts describe Cruz as telling police that he drove away with the car after he had participated in an unspecified program at St. Charles Hospital in Port Jefferson, about five miles from the Coram gas station. Cruz, described by police as homeless, also reportedly said that he intended to drive to Nassau County. Brewington declined to discuss Cruz’ housing situation.

About two miles from the gas station, Cruz lost control of the Jeep, became stuck in a snowbank, rocked the car forward and back, and hit a police vehicle as officers were trying to arrest him, according to police reports. Those accounts also stated that Cruz intentionally rammed the police vehicle and kicked, flailed and spit as officers subdued him.

In a news release, the police department said a second officer was injured as Cruz was being taken into custody.

Releasing the body camera recording on March 2, Suffolk County Executive Steve Bellone and then-Police Commissioner Geraldine Hart announced the suspensions of the two officers recorded as kicking Cruz and modified duty transfers of the three officers and a supervisor recorded as failing to intervene.

The police department has declined to name the officers or to disclose whether they are back on duty. State civil service law allows local government employees to be suspended without pay for up to 30 days pending disciplinary charges.

In a March 3 letter to Sini, Brewington asked that the officers involved in the incident face criminal charges, including for perjury, making sworn false statements and false written statements, along with assault charges based on the body camera recording of the events at the end of the chase.

Legal Aid Society of Suffolk County attorney Stephanie Giancristofaro, who is representing Cruz in his criminal case, said the investigation should include whether police lied in their statements.

“We hope that the district attorney’s office takes these allegations of misconduct against these officers seriously and holds these officers accountable for this egregious conduct as they would any other civilian accused of a similar crime,” she said.

Police department spokeswoman Dawn Schob said the department would not comment because of the ongoing investigation and pending litigation.

Bellone’s spokesman Derek Poppe did not respond to a request for comment.

Suffolk PBA President Noel DiGerolamo declined to review the surveillance video and case records. He said he would not comment because of the investigation.

When Bellone and Hart announced the officers had been suspended or reassigned, DiGerolamo said, “I am troubled by any rush to judgment when talking about an individual who stole a motor vehicle and used it as a weapon to crash into two police cars.”

DiGerolamo said he would forward a request to interview Filiberto to Filiberto’s attorney. DiGerolamo did not identify that attorney. There was no response.

Activists who have called for independent oversight of police said that the DA and police department have taken too long to resolve their investigations in the Cruz case.

“This is the problem of why police can’t police themselves. Here we have someone clearly on camera beaten by police. We don’t know if these officers are still out there,” said Shanequa Levin, a convener of the advocacy group LI United to Transform Policing & Community Safety.

“Police aren’t above the law. They should be held accountable. And it shouldn’t take years and years to do so. And the public deserves to know what’s going on during this process.”