Tom Suozzi had a winning strategy in CD3

Tom Suozzi’s win of the Democratic nomination in the 3rd Congressional District isn’t surprising, but it wasn’t a sure thing. His two main competitors, Suffolk Legis. Steve Stern of Huntington and former North Hempstead Supervisor Jon Kaiman, ran unexpectedly lackluster campaigns while Suozzi executed a disciplined strategy: running up the vote totals in Queens to minimize Stern’s advantage in Suffolk. There were about 186,000 eligible voters, but a paltry 18,487 votes were cast, a circumstance that favored candidates with high name recognition. According to unofficial results from the state Board of Elections, Suozzi got 6,532 votes, Stern received 4,069 votes, Kaiman won 4,060 votes, Anna Kaplan got 2,815 votes and Jonathan Clark received 909 votes. Here’s a map of Suozzi’s support: 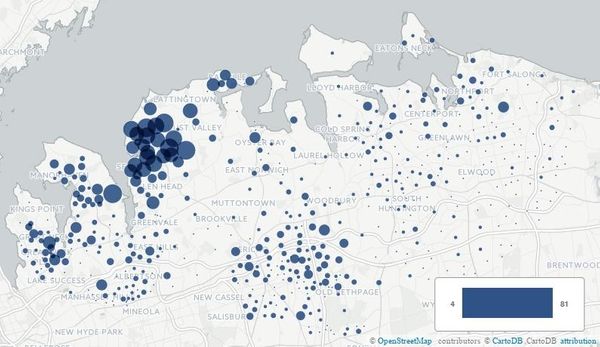 None of the candidates raised the $1 million that party leaders told them would be needed, but it especially hurt Stern, who needed to introduce himself to Nassau County, where 51 percent of voters in the district live. Stern was the first to run TV ads, but ran out of money and couldn’t continue airing them. He also never responded to Suozzi’s attack mailing that said Stern was weak on environmental issues because of his two votes to “raid” the Suffolk County open space fund. Stern needed about 40 percent of the Suffolk vote to be in contention, but he only got 33 percent. That Suffolk Democratic chair Rich Schaffer was distracted by his fight with County Executive Steve Bellone didn’t help Stern either. Kaiman, who did very well in his home territory on the Great Neck peninsula, was not able to hold down the Suozzi vote total in the rest of the Nassau, especially in Suozzi’s base of Glen Cove. Spending heavily on TV and mailings, Anna Kaplan, a North Hempstead Town Board member, might have hurt Kaiman in their hometown, but didn’t make a dent in Oyster Bay. In the end, however, it was 1,511 voters in Queens, a cornerstone of his strategy, that ensured Suozzi’s wide margin. Borough President Melinda Katz — and we wonder whether the unseen hand of county Democratic chair Joe Crowley played a role — worked hard for Suozzi, who spent a lot of time courting endorsements and working voter-rich apartment complexes. Click here to see how much money each candidate spent per vote. — Rita Ciolli

Too close to call in CD1

Democratic hopefuls Anna Throne-Holst and David Calone came away from Tuesday’s primary in the 1st Congressional District just 29 votes apart – in Throne-Holst’s favor. Toward the end of next week, the Suffolk County Board of Elections will begin tallying 1,665 absentee ballots. The count usually takes a couple of days. National Democratic strategists who want to narrow the Republican majority in the House, if not take it over, are nervously awaiting the results. Their belief is that Throne-Holst has the better chance of defeating GOP freshman incumbent Lee Zeldin, because she can build a bigger war chest of donations from advocacy groups for women. A spokesman for Throne-Holst, Andrew Grunwald, said he’s confident her lead will hold. “We worked and talked with absentee voters throughout the campaign,” he said. The North and South forks, where Throne-Holst would appear to have an advantage, harbor more likely absentee balloters than Calone’s base in Brookhaven. So, perhaps the Throne-Holst campaign’s confidence is justified. No word yet from the Calone campaign about whether it mounted an absentee ballot effort. — Anne Michaud

Tom Suozzi now has the Democratic nomination for his 3rd District congressional run, but he still lacks a certified Republican opponent, for at least another 10 days. State Sen. Jack Martins is the presumed GOP nominee, but he just can’t shake Philip “Flip” Pidot. Pidot wants a new primary date and in court on Wednesday he was at least guaranteed the right to fight another day, with the next federal court hearing on the issue scheduled for July 11. In a statement, O’Brien Murray, an adviser to Martins, called Pidot a “perennial fringe candidate.” Pidot was knocked off the GOP primary ballot by a Martins challenge of his petitions, then restored when he was able to prove he did, in fact, have enough legitimate signatures. But that came last week, too late to print a ballot for Tuesday’s primary. — Lane Filler

Tom Suozzi’s election night event at Ben’s Kosher Delicatessen in Greenvale felt like home — even if the kosher hot dogs would not have been on the menu at Stango’s, the traditional Italian restaurant in Glen Cove that the candidate co-owned for a short time. Three Suozzi generations got together in a small celebration of the primary victory. The candidate dedicated his win to his mother, Marge, and father, Joe, for passing on the passion for politics and dedication to public service. “My mother is 92, and my father is going to be 95 in August, they should be in bed by now,” Suozzi joked. “What are you guys doing up so late?” Here’s a clip. — Roberto Capocelli This is The Point, the editorial board’s daily newsletter about New York politics. Click here to subscribe.