0 ENGLISH
0 MATH
opt-outs*
*Not all districts responded to the Newsday survey
BY NEWSDAY STAFF | Published: April 17, 2015

Record numbers of students in grades three through eight in public school districts across Long Island are refusing to take state standardized tests in spring 2015. High numbers have been reported in school systems upstate, too — in the Westchester/Rockland and Albany areas, and in Buffalo, Rochester and Syracuse.

On Long Island, the “opt-out movement,” as it is known, now includes parents, school administrators, teachers and their unions and some elected officials, both in the state legislature and on local school boards. Activists, since their cause’s grassroots origins in the 2012-13 school year, have used social media, public forums, robo-calls and paid advertising to spread the message.

These groups and individuals have coalesced around the issue of test refusals for a variety of reasons: complaints about the content and frequency of tests tied to the Common Core national academic standards, parents’ concern about the tests’ stress on their children and test-prep time affecting other subjects and pursuits, displeasure with education policy changes at the state level, and the linkage of principals’ and teachers’ performance evaluations to students’ test scores.

The first significant increase in student test refusals on Long Island occurred with the spring 2013 administration of state English Language Arts and math tests in grades three through eight. That response was largely driven by what educators and parents said was a rushed, confusing implementation of the first, tougher tests aligned with the Common Core.

Since then, with fierce controversy over educators’ evaluations, many teachers and their unions joined the opt-out battle lines. The issue has become increasingly politicized and volatile, pitting activist parents, educators and unions against Gov. Andrew M. Cuomo and policy-makers on the state Board of Regents and in the State Education Department.

Cuomo, the Regents and Education Department leaders say changes must be made to improve students’ readiness for college and careers and to comply with requirements in federal and state laws. The governor singled out the evaluation system for reform, saying current law doesn’t properly allow for dismissal of ineffective teachers.

Seeking to gauge the number of test refusals, Newsday conducted surveys of the Island’s 124 public school districts in spring 2014 and is doing so in 2015. There is no state agency or official organization that gathers this data on the actual days of the ELA and math tests’ administration.

Use the arrows to the right of each section to navigate through this project.

What is Common Core?

Governors and state education chiefs of 48 states developed the Common Core State Standards, a set of academic benchmarks for kindergarten through 12th grade in English Language Arts/literacy and mathematics. Today, 43 states — including New York — have voluntarily adopted and are working to implement the standards, which are designed to ensure that students graduating from high school are college- or career-ready. The New York State Board of Regents, which sets education policy, adopted the Common Core standards in July 2010 and incorporated some New York-specific elements in January 2011.

How is student testing related to Common Core?

The Common Core standards are aimed at raising academic quality in all schools and use standardized tests to make schools and teachers accountable. In New York, test questions measure the Common Core standards in English Language Arts and mathematics for students in grades three through eight, according to the State Education Department. In 2013, New York was among the first states to administer tests that were aligned with the Common Core. Testing generally is spread over six days — three for the ELA exam and three for the math exam. Each test day, the estimated completion time is 50 minutes for students in grades three and four and 50-60 minutes for those in grades five through eight.

Why is there controversy over Common Core?

Three states have withdrawn their acceptance of the Common Core standards, and legislators in a dozen states are reviewing their states’ posture, according to news reports. Some have argued that the Common Core is a federal imposition, and that state and local educational standards work best. Many educators initially supported the Common Core standards, saying that if implemented appropriately, they have the potential to improve student learning. In New York and elsewhere, testing associated with the Common Core has drawn strong criticism, with some parents arguing the exams are flawed and age-inappropriate and do not provide a valid diagnostic tool. Others have said passing rates set for the exams are unrealistic. Opponents of the tests also say they are not properly aligned with the curriculum, and that teachers are not allowed to discuss the test content with parents or even colleagues. Proponents, such as High Achievement New York, a coalition of education, business and civic groups, say that tests tied to the Common Core standards are a solid measure to evaluate progress toward students’ college and career readiness. The tests are considered an annual “checkup,” they say, to ensure all kids are making progress, provide teachers and schools more information, and offer a common measure that can be used to help close the achievement gap affecting minority students.

What is the impact of Common Core testing on teacher evaluations?

Under New York State’s revised teacher evaluation law passed in March 2012 — also known as Annual Professional Performance Review — teachers’ and principals’ job ratings were for the first time tied to the results of students’ scores on state standardized tests. For teachers, 20 percent of their evaluation was based on what the state calls student “growth scores.” The state’s push for stricter teacher evaluations — an initiative encouraged by President Barack Obama’s administration, and ultimately rewarded with federal Race to the Top financial incentives — started on a relatively upbeat note. But the linkage has caused continuing controversy. Teachers, among other concerns, fear the ratings are unfair and don’t properly account for students with learning disabilities, limited English proficiency and low socioeconomic backgrounds. This year in New York, the portion of teacher and principal job ratings that is tied to test scores is being reevaluated. A major issue that remains unsettled is whether a revised system will base about 50 percent of teachers’ job ratings on students’ performance on Common-Core-associated tests, as Gov. Andrew M. Cuomo has proposed, or whether that percentage would be far lower — perhaps 20 percent or less, as favored by the Regents.

What has happened to students’ test scores since implementation of the Common Core standards?

Test results plunged soon after implementation. Statewide, the percentage of children in grades three through eight rated proficient or better in English dropped from 55.1 percent in 2012 to 31.1 percent in 2013. The math scores declined from 64.8 percent rated proficient or better in 2012 to 31 percent in 2013. About 40 percent of Long Island students in grades three through eight tested proficient or better in English in 2013. About 37 percent did in math. In 2014, student passing rates on the state’s English tests were down on the Island and essentially flat at the state level, while math test scores rose significantly both on Long Island and statewide, the State Education Department reported. On the Island, the percentage of students passing in English dropped from 39.6 percent to 36.8 percent. Statewide passing rates dipped from 31.1 percent to 31 percent. The percentage of LI students passing in math rose from 37.5 percent in 2013 to 43.4 percent in 2014. Statewide passing rates in math increased from 31 percent to 36 percent.

What is the “opt-out movement”?

The so-called opt-out movement started after the rollout of curriculum aligned with the Common Core and the more rigorous tests stemming from it. The movement spread through grassroots activism and social media. In April 2013, the first year of significant test refusals, dozens of students in Long Island school districts boycotted the test on the first day of testing in English and math. Protesting parents say the existing test system exerts unneeded pressure on students. In April 2014, about 9,500 children in grades three through eight opted out of the English Language Arts exam, according to a Newsday survey drawn from responses from 67 of the Island’s 124 districts. This week, more than 70,000 students in 110 of the Island’s districts boycotted the ELA exam. Karen Magee, head of the state’s 600,000-member teacher union, in March 2015 called on parents to boycott the state tests — the first time the organization took that stance publicly.

What are the consequences for a school with a high number of test refusals?

State Education Department officials have said that a district’s failure to meet the federal requirement of 95 percent participation on standardized tests, if not corrected, could result in penalties — including partial loss of federal Title I aid, used for academic remediation. To date, the department has not imposed fiscal sanctions on a district because of failure to meet participation requirements on state tests.

Is Common Core here to stay?

Some local leaders have said that there’s not enough support at the federal or state levels of government to force an end to the Common Core standards. Hillary Rodham Clinton, who is running for the 2016 Democratic nomination for president, has voiced strong support of the standards. In March, Cuomo emphasized his commitment to education reform. “Public education in New York and around the country is undergoing tremendous change as parents and citizens demand more performance, accountability and results,” the governor wrote in an article published in Newsday’s opinion pages. “While change is difficult, it is also the only way to get better, and we must continue to improve our education systems to give our kids the opportunities they deserve.” Activists, however, say that the state cannot ignore the large number of test refusals and that they will continue their campaign. 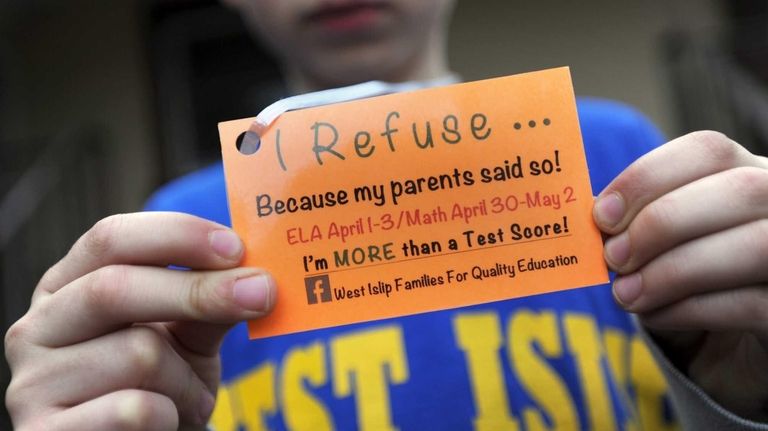 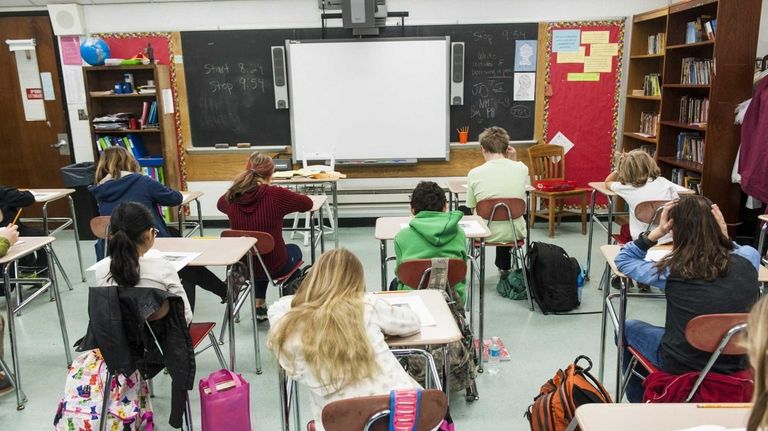 Record number of students opt out of tests 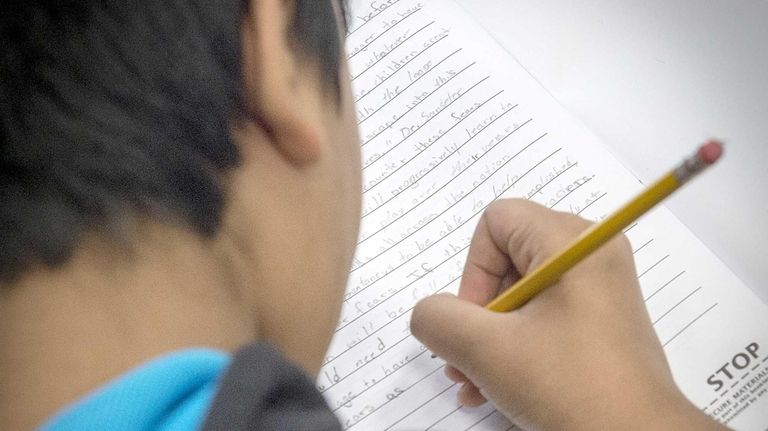 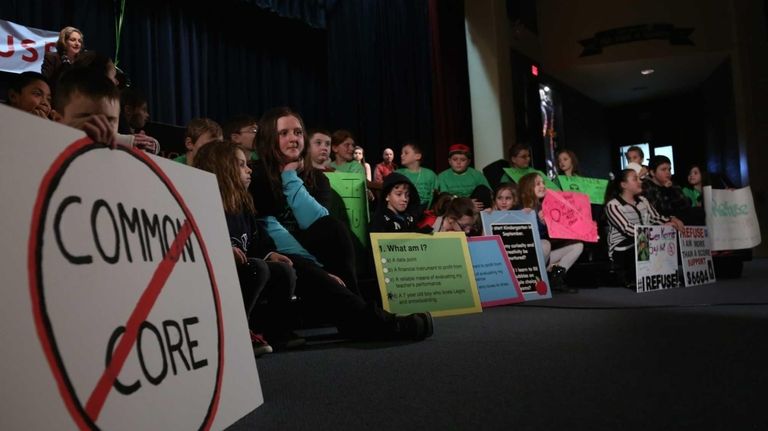 Editorial: Let's have a civil chat 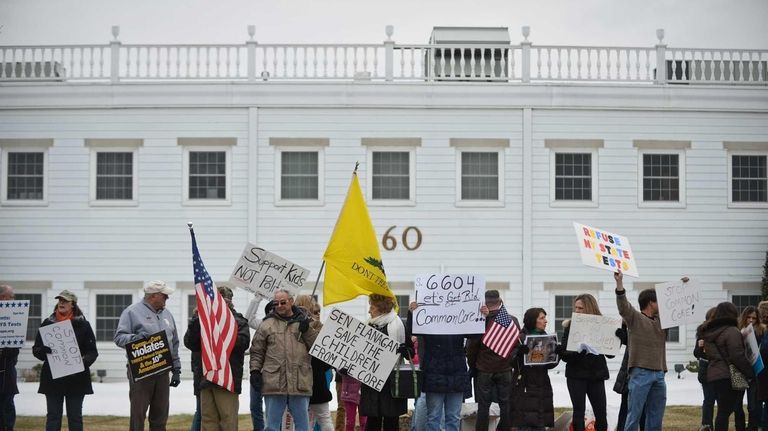 How tough are the tests? See how much you remember from grade school with these sample questions from various Common Core sample tests available on EngageNY.org.

Group: Thousands of LI students opted out of Common Core

Many LI parents having kids opt out of tests

More around the web

COMMON CORE – YOUR TURN: Does Common Core raise standards and ensure our schools are up to snuff or does it hamper our…