Gov. Andrew M. Cuomo holds a 21-point lead over Republican gubernatorial candidate Rob Astorino on Long Island, even though just 1 in 5 residents say they are better off now compared to four years ago, according to a new Newsday/News12/Siena College poll.

Siena surveyed 686 likely Nassau and Suffolk voters from Oct. 5-9. The survey has a margin of error of plus or minus 3.7 percentage points.

If the election for governor were held today and the candidates were Andrew Cuomo, Rob Astorino and Howie Hawkins, whom would you vote for?

Regardless of unhappiness about the state’s and Island’s direction, more respondents have more faith in Cuomo than Astorino in being able address taxes, jobs, schools and other key issues, said Don Levy, director of the Siena College poll.

“They are not taking it out on Cuomo,” Levy said.

If the election for state attorney general were held today and the candidates were Eric Schneiderman and John Cahill, whom would you vote for?

The poll found just 21 percent of Long Islanders believe they are better off now compared to four years ago; 35 percent said worse and 44 percent said about the same. About 34 percent said the Island is on the right track, while 57 percent said otherwise.

Historically, Republican candidates need to carry Long Island to win a statewide election. George Pataki, the last GOP to win statewide election, carried the Island in 1994, 1998 and 2002. The new poll, while closely marking previous statewide surveys (the most recent Siena statewide poll gave Cuomo a 29-point lead), makes it clear that Astorino has to make up huge ground on the Island in the final month of the contest.

More voters picked Cuomo over Astorino when asked who would do a better job holding down taxes, increasing jobs, addressing corruption and resolving the controversial Common Core academic standards — issues that respondents identified as among the most important.

Astorino has sought to draw voters upset with the Common Core, promising to repeal it while blaming Cuomo for supporting it. Yet in the poll, 45 percent of voters said Cuomo would do a better job “resolving” the issue while 32 percent chose the Republican.

“It’s hard to find a lot of good numbers in this poll for Rob Astorino,” Levy said.

Astorino has been critical of Cuomo’s handling of Sandy recovery, questioning spending in some areas and saying aid is too slow. But 60 percent of Islanders said they are satisfied with the state’s recovery efforts while 38 percent said dissatisfied.

If the election for state comptroller were held today and the candidates were Tom DiNapoli and Bob Antonacci, whom would you vote for?

Most respondents — 69 percent — weren’t aware of the controversy about Cuomo’s shuttering of the so-called Moreland Commission, which he created to investigate corruption. The governor has been criticized for interference and a federal attorney has taken over the commission’s cases. Of those aware of the issue, just 29 percent believed the governor’s claim that the panel was an “overwhelming success.”

The Cuomo campaign declined comment. Astorino spokeswoman Jessica Proud said, “Almost no one thinks they are better off under Governor Cuomo’s failed leadership. They know the state is going in the wrong direction and we will continue educating New Yorkers about our plans that will cut taxes to spur the economy, clean up Albany’s corruption and get rid of Common Core that is hurting our kid’s education.”

Hawkins said his 5 percent share is many times better than the 0.5 percent he attracted from Nassau and Suffolk counties in the election four years ago. He said he believes his opposition to Common Core is resonating with Island parents and teachers.

Schneiderman has a smaller lead than his Democratic ticketmates because he’s not drawing as much Republican support, Levy pointed out. Schneiderman received support from 20 percent of Republicans, whereas Cuomo drew 36 percent and DiNapoli 32 percent.

“It’s not so much that people are gravitating to Mr. Cahill,” Levy said of the former top advisor to ex-Gov. George Pataki.

Levy added that Cahill probably has to reverse his deficit and win the Island if he’s to win statewide. “He has to do better than trailing by 7 on Long Island to have a chance of winning,” Levy said.

Astorino and all the down-ballot candidates are having name-trouble recognition, the survey shows. About 46 percent said they don’t know/had no opinion of Astorino; 53 percent said that of DiNapoli; 59 percent of Schneiderman; 77 percent of Cahill; and 81 percent of Antonacci.

Democrat Mary Ann Keller, 75, of Floral Park, a retired director of a non-profit in Manhattan, said that in some ways, Cuomo is running on the name of his dad, Mario Cuomo, who was governor from 1983 to 1994.

“That’s one reason that I like him,” Keller said. “I still believe in what the Cuomos stand for — helping the people. I think we should give the Common Core education a chance. It could improve the educational system.”

Others want a break with the past. Republican Mitchell Bernstein, 60, of Setauket, a director of information technology, said he doesn’t know that much about Astorino, “but he’ll create economic benefits.”

“The GOP traditionally is more friendly on the tax side,” he said. “I would never vote for a Democrat. I’m not interested in redistributing wealth. Cuomo is just another politician working for the city” of New York.

“Voters will hear about Eric’s record winning historic settlements from the big banks that wrecked our economy, cracking down on public corruption and providing bulletproof vests to cops . . . ,” he said.

In the comptroller’s race, Dinapoli’s campaign manager, Jeremy John, said, “Our grassroots campaign is working hard; speaking to voters and finding our message of fighting corruption and safeguarding taxpayer dollars, resonating with many across Long Island.”

Antonacci spokesman Brian Renna said, “I just wish we had enough money to get our message out across the state. I think these are people who care deeply about the state and they would have done a wonderful job talking about the finances of this state.”

With Michael Gormley and Sid Cassese 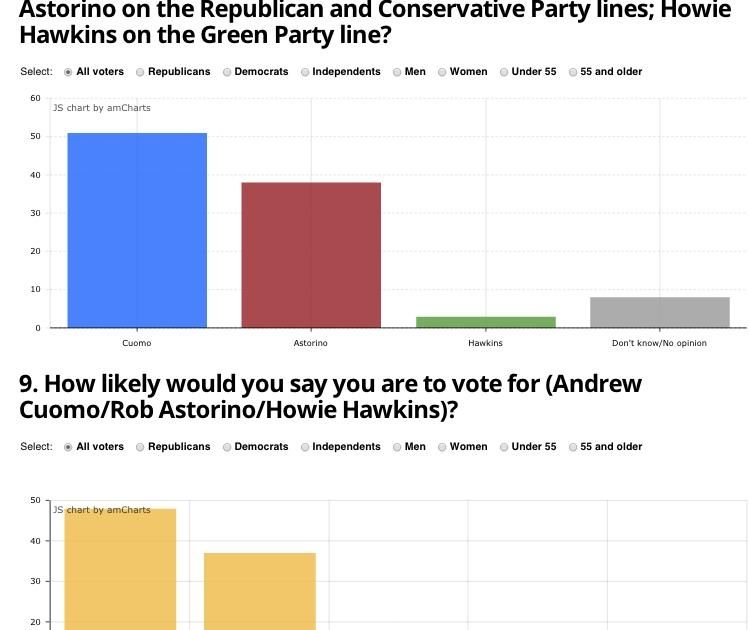