A young senator from Illinois sweeps to a resounding victory, inspiring millions while becoming the first African-American …

… to be elected president of the United States. He brings hope and the promise of a new day in politics to Washington — while preparing to take office during troubled economic times.

The president soars into office before more than a million cheering Americans at his inauguration, but he is enmeshed …

… in two wars and the “gathering clouds and raging storms” of an economy teetering on the brink of another Great Depression. In his first 100 days he fights to push through a massive stimulus bill and is forced to choose between an expensive and unpopular bailout or letting two giant companies and more than a million jobs potentially vanish. His high-powered wife looks for a cause to champion while their two young children settle into a new school — and pick a White House dog.

All in on health care

Reeling Republicans unite against Obama, leading him to abandon a key campaign promise to be bipartisan to muscle through his health care overhaul. On foreign policy, Obama — who earlier became the first sitting U.S. president in nearly 90 years to win the Nobel Peace Prize — makes a nuclear arms deal with Russia and holds a summit on decreasing nuclear materials.

With the economy in doldrums and nearly 10 percent of the country out of work, anger about the rising tide of debt and big government health care coalesces into a tea party wave that propels a GOP takeover of the House in the midterm elections. A somber Obama ruefully calls the election “a shellacking” and scrambles with his advisers to decide what to do next.

Obama secretly has to make one of his biggest decisions in office. Should he send Navy SEAL Team Six on a risky mission to take out Osama bin Laden? As the president and his advisers watch the consequences of his choice unfold in real time from the Situation Room, “the minutes passed like days.” Obama makes a dramatic nighttime announcement from the White House.

Some of the presidency is actually fun and games. Obama decompresses by proclaiming his picks for his annual NCAA Tournament bracket. He welcomes a key foreign ally, scarfing down hot dogs at a tournament game — while squeezing in a visit to a swing state he’ll need in the upcoming election.

Obama and the nation watch live as reporters rush to relay the Supreme Court’s verdict on the constitutionality of his Affordable Care Act, handing the president a major victory. He spends his summer kicking his re-election campaign into high gear as GOP rival Mitt Romney attacks his policies and argues he’d be a better leader for America.

The president is told the U.S. ambassador to Libya and three other Americans have been killed in Benghazi. The administration initially calls it a spontaneous street protest, but it is later found to be a premeditated attack by Islamic extremists — a mistake that engulfs Obama in political turmoil as he’s forced to answer charges he’s weak on terrorism.

A rusty Obama prepares for a prime-time showdown with Romney that’s his first debate in four years. The results shock his advisers, as the polls dramatically tighten and his re-election suddenly appears in jeopardy. Can he summon a comeback?

A nail-biting election goes late into the night. The president, who found his footing in the last two debates, tells the American people “we have fought our way back” and that the country’s “best is yet to come.” He and Michelle Obama look back at the past four years — as the first dad tells Ryan Seacrest their daughters will be allowed to date during his second term.

Trayvon ‘could have been me’

Obama makes a rare public reflection on race after a high-profile acquittal in the shooting death of a Florida teen. “Trayvon Martin could have been me 35 years ago,” Obama says. “There are very few African-American men in this country who haven’t had the experience of being followed when they were shopping in a department store,” he says. “That includes me.”

Democrats lose the Senate in the midterm elections and Obama prepares to go it alone in the “fourth quarter” of his presidency. In a flurry of executive actions and foreign policy maneuvers he tries to forestall the deportation of millions of undocumented immigrants, restore diplomatic relations with Cuba and reach a nuclear deal with Iran.

Shortly after Obama and more than 150 world leaders meet in Paris to try to hammer out a climate deal, he’s forced to turn his attention back to the immediate threat of terrorism as an attack in San Bernardino, Calif., leaves 14 dead. He prepares to address the nation from the Oval Office.

The president is often called the most powerful man in the world.

But he can never get Congress to act on gun control, even as one mass shooting after another — with victims ranging from school kids to veteran police officers — happens during his tenure. More than three years after the massacre at Sandy Hook Elementary School in Newtown, Conn., Obama hosts an event at the White House on gun violence and sheds rare public tears. “Every time I think about those kids, it gets me mad,” he says. The NRA slams his latest plan as “ripe for abuse.”

Challenge to his legacy

His approval ratings surge and the unemployment rate drops, but voters reject his chosen successor and turn …

… to Donald Trump, a man who’s his polar opposite in policy and temperament, leaving his legacy in jeopardy. The president pushes himself and his staff to the finish line, fighting a losing battle with Republicans over a Supreme Court nominee and trying to prevent Obamacare from being dismantled — while facing challenges from Russia, terrorists, Syria and the Israeli-Palestinian conflict in the waning days.

An end and a beginning

Obama’s presidency comes to a close, but this is not the end for him and Michelle.

Though cornerstones of his policy record hang in the balance and his political legacy is still to be determined, his place in American history is firmly cemented and they vow to remain actively engaged. Obama is only 55 and Michelle a few years younger — with much of their story still left to be written.

35 images from Obama’s presidency to remember

See memorable and unforgettable images from the Obama presidency. 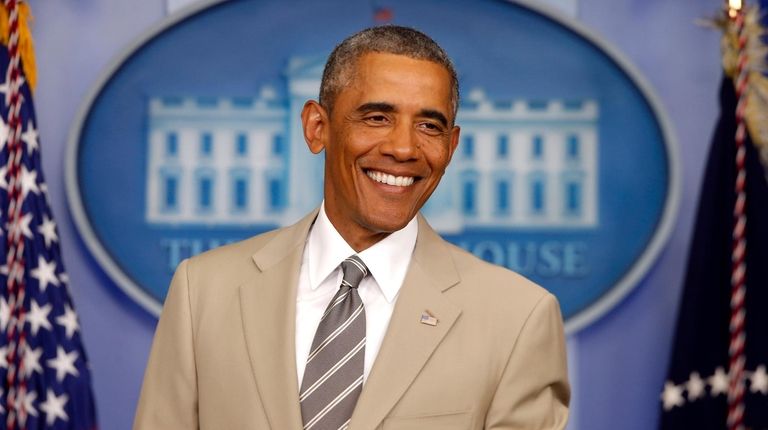 Obama has been more comfortable in a wider variety of pop culture settings than perhaps any of his predecessors.

What will you remember most about President Obama?

Share your thoughts about President Obama on our reader interactive. 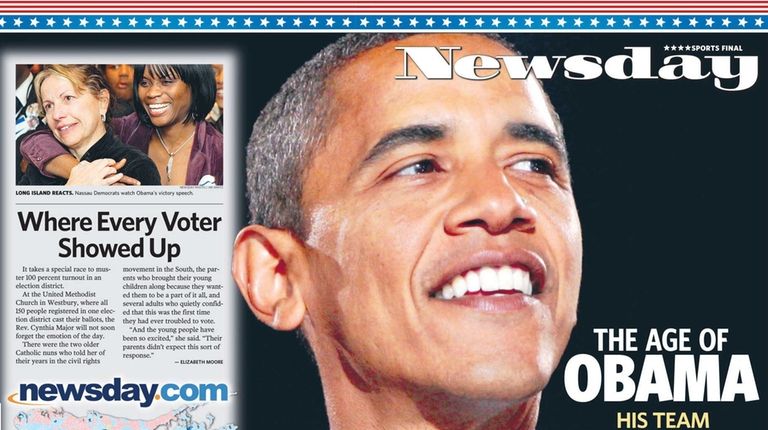 Our most memorable Obama covers

Forty of Newsday’s most memorable covers on Barack Obama as a presidential candidate and president.

More on the Obamas

What’s next for Michelle Obama?The world is Michelle Obama’s oyster. What she’ll take on in the future has sparked the imaginations of many. Most interesting things named after Barack Obama You may know about Barack Obama Elementary School on Long Island — but have you heard about the spider named after the president? Or the Obama phone? Or the Irish bread? Sasha & Malia: The Obama daughters through the yearsWatch the first daughters, Malia and Sasha, grow up in this minute-and-a-half video. Best Joe Biden, Barack Obama memesSocial media exploded with memes playing off the bromance and chemistry between President Barack Obama and Vice President Joe Biden as they began their exit from the White House. Barack Obama editorial cartoonsEditorial cartoonists from around the country on the 44th president. Did Obama keep past State of the Union promises?A breakdown of major proposals President Barack Obama has made in his State of the Union addresses, and what happened afterward.