Hurricane Maria has devastated Puerto Rico, but the full picture of the damage and the grim situation facing residents is still unclear. Loss of power and phone service to nearly the entire island has made communication spotty so many Americans have yet to hear from family and friends there. Here’s what you need to know about storm’s damage and how you can help:

The storm immediately left nearly all 3.4 million people without basic necessities like water and power.

The storm tore up the U.S. territory on Sept. 20, killing at least 34 people and leaving nearly all 3.4 million people in Puerto Rico without power and most without water.

Gov. Ricardo Rossello has said he believes the hurricane caused $90 billion in damage across the island.

The storm smashed poles, downed power lines and damaged electricity-generating plants, knocking out a grid that would be considered antiquated on the United States mainland.

Generators are providing power to the fortunate few who have them. 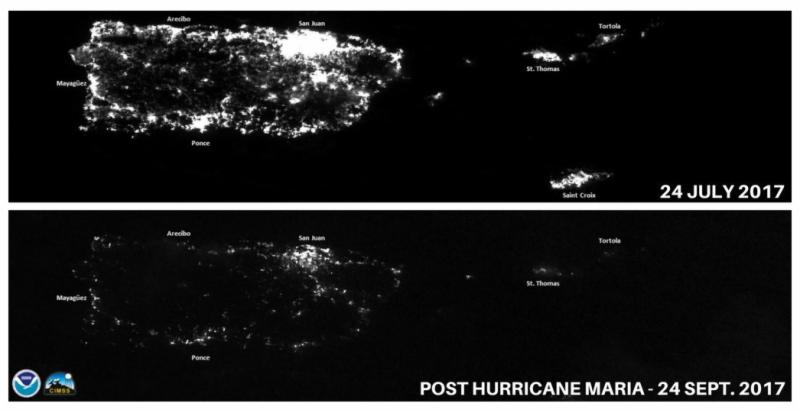 Food and water shortages plague the island amid the widespread power outage. Communications are spotty and roads are clogged with debris.

"It's inhumane" what's happening at the airport in San Juan, a nurse from Little Rock, Arkansas told me – they need food, water and fans. pic.twitter.com/Fcm3QBiMVB

Officials said electrical power may not be fully restored for more than a month.

Many others are also waiting for help from anyone from the federal or Puerto Rican government. 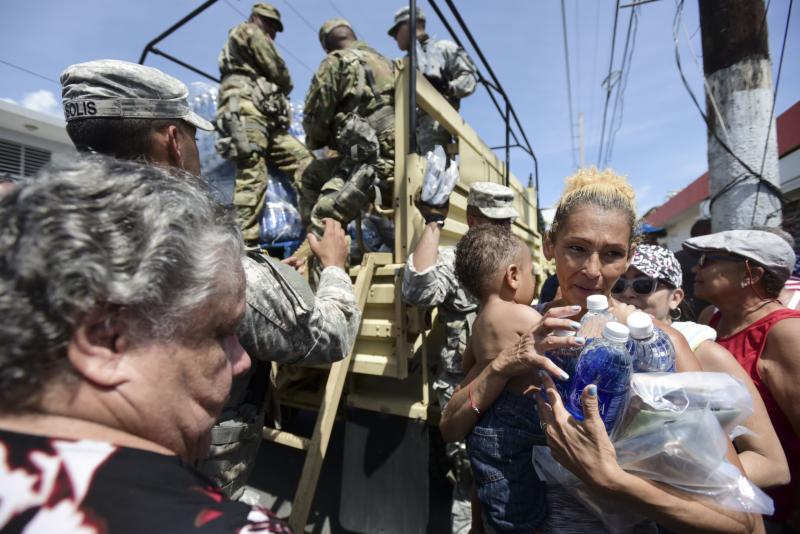 But the scope of the devastation is so broad, and the relief effort so concentrated in San Juan, that many people from outside the capital say they have received little to no help.

“The devastation in Puerto Rico has set us back nearly 20 to 30 years,

“I can’t deny that the Puerto Rico of now is different from that of a week ago. The destruction of properties, of flattened structures, of families without homes, of debris everywhere. The island’s greenery is gone,” Gonzalez said.

The island’s economy and infrastructure were in sorry shape long before Maria struck.

A $73 billion debt crisis has left agencies like the state power company broke. As a result the power company abandoned most basic maintenance in recent years, leaving the island subject to regular blackouts. 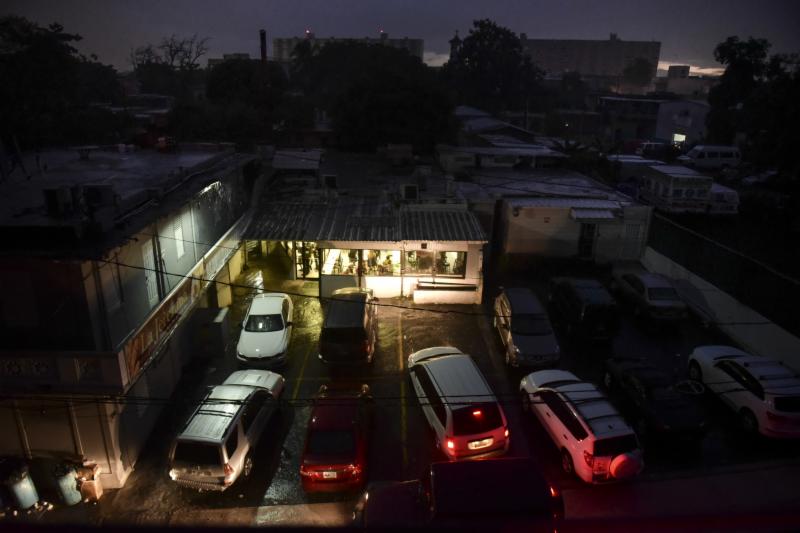 The future looks grim as it’s feared that financial losses from the storm and the inability of young people to find work will perpetuate economic turmoil.

Tax collections will drop, and Puerto Rico’s tourism industry “will not recover for some time,” according to James Eck, a vice president with the credit-rating agency Moody’s. 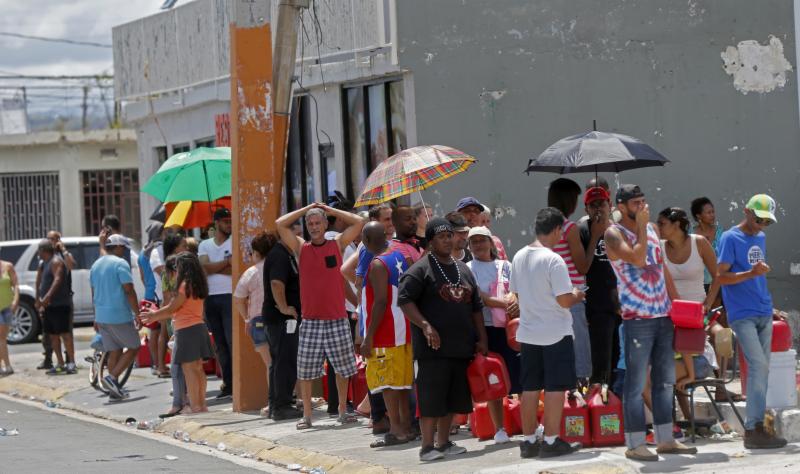 People line up for gas in San Juan on Sept 25. Photo credit: AP

That would further a vicious cycle already underway, where fewer workers means less tax revenue, which hurts the economy, which encourages even more people to leave. Puerto Rico’s population dropped by 8 percent from 2010 through the middle of 2016.

While the urge to donate clothes and other supplies is natural, money is the best way to contribute during times of disaster, charities and philanthropy experts say. 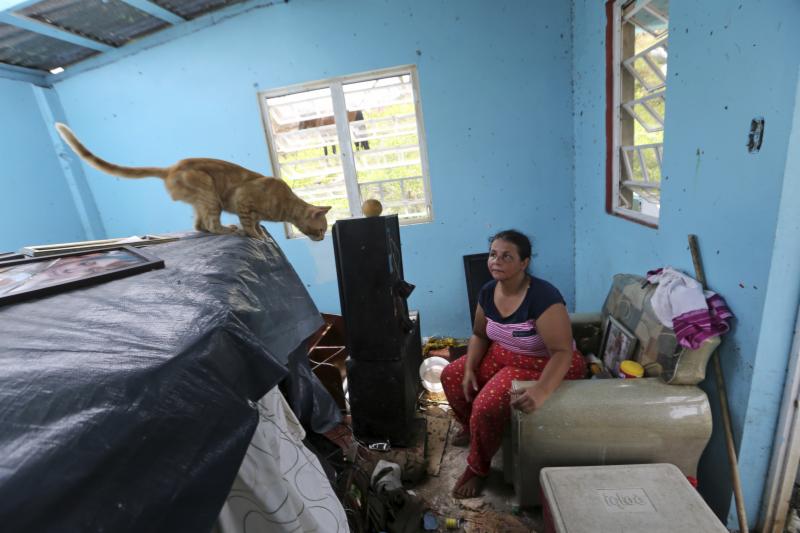 A woman sits in her hurricane-damaged home in Montebello on Sept. 22. Photo credit: AP

Donating directly through a website gets money to a charity faster than a text donation, even though the text might seem easier.

Still, there’s never a time and place for supplies. Diapers, for example, are often requested, as are construction supplies. 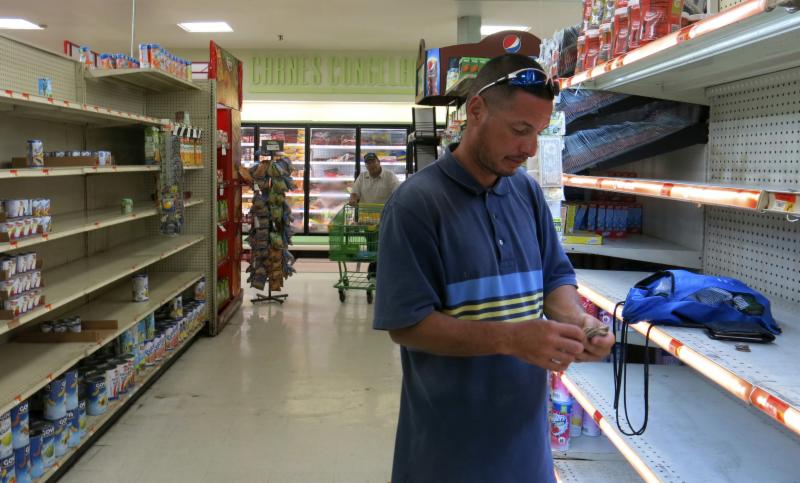 Bottled water was gone from stores throughout Puerto Rico in the few stores open five days after the earthquake. Photo credit: AP

How the United States is responding