The infamous garbage barge set out to sea 30 years ago this week, carrying more than 3,100 tons of Islip Town and New York City trash on a voyage that would change how Long Island collects and disposes of its solid refuse.

Officials, seeing landfill space running out on Long Island, decided to try something new: pay a private carting consortium to ship the trash to a North Carolina dump for a fraction of what it would cost to dispose of it in the Northeast. 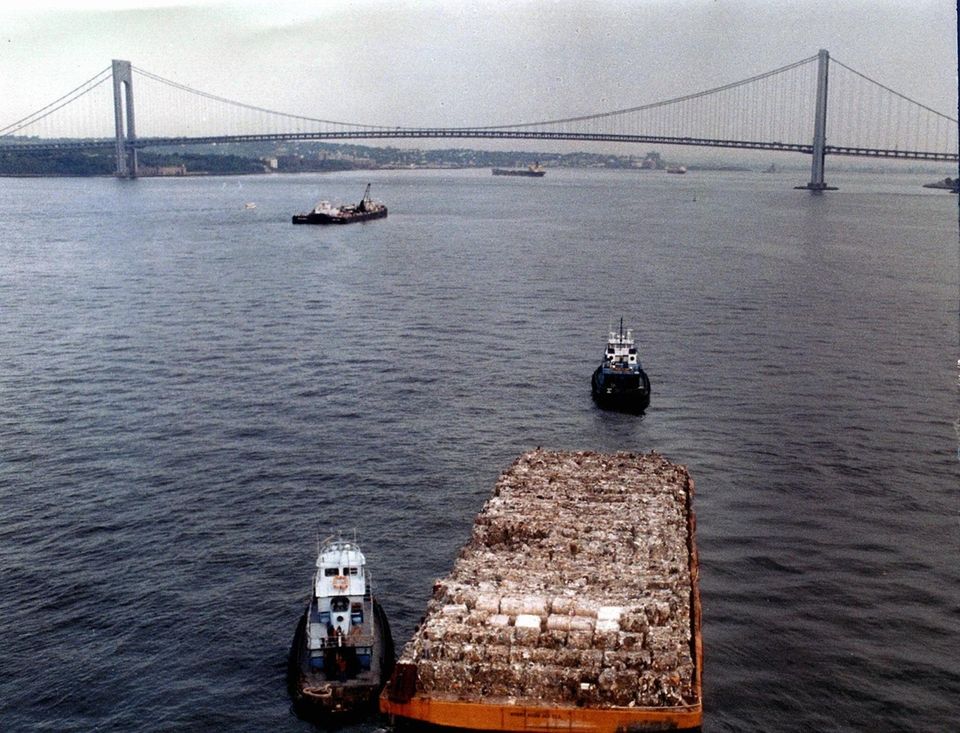 The Break of Dawn tugboat and its barge sit near the Verrazano-Narrows Bridge off Brooklyn on May 17, 1987. Credit: Newsday / Thomas Koeniges

North Carolina officials, fielding complaints from residents who saw the barge trying to dock, wanted nothing to do with the fetid haul. After being turned away, the Mobro 4000 meandered from place to place for two months, desperately looking for a dump site. It would be turned away by Louisiana, Texas, Florida and Belize. Authorities in Mexico and Cuba threatened to fire artillery at the barge if it tried to dock.

Officials from Islip and New York State eventually negotiated a deal to have the garbage burned in Brooklyn with its ash buried in an Islip Town landfill. 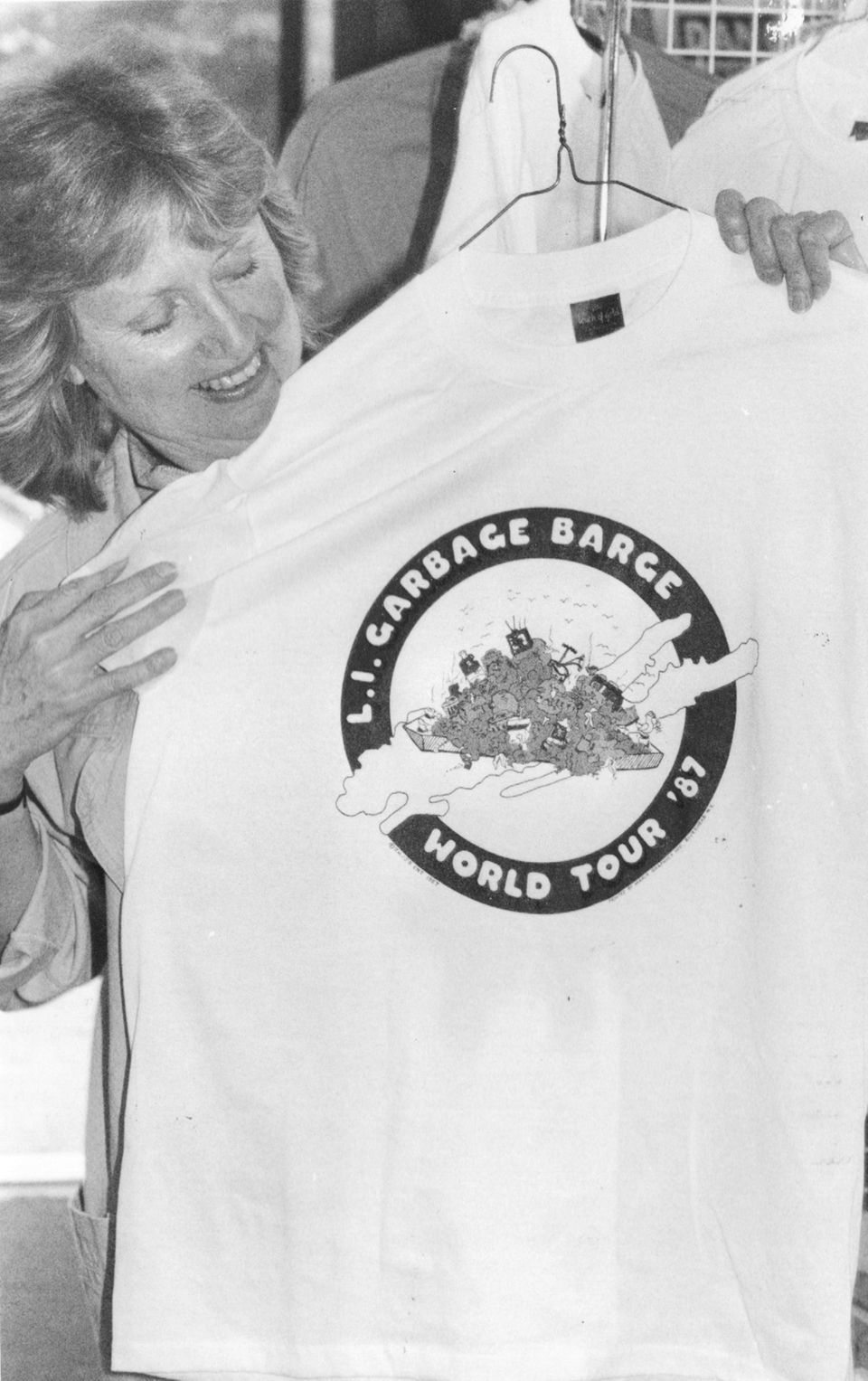 Marlene Haney of Commack checks out a commemorative T-shirt at a card store in Huntington on June 3, 1987. Credit: Newsday / Thomas R. Koeniges

The saga attracted national headlines — and late-night barbs from “Tonight” show host Johnny Carson. Long Island’s efforts to dispose of or recycle its trash have improved by many measurements, officials and industry experts say. But it may not be enough, they caution.

“I think the garbage barge is an excellent reminder of what can happen when we put the environment sort of off to the side and say, ‘We don’t have to worry about it,’” said R. Lawrence Swanson, director of the Waste Reduction and Management Institute at Stony Brook University.

Garbage disposal continues to vex local officials. Critics say Long Island’s recycling efforts — a key factor in reducing the amount of trash to be incinerated and landfilled — lag other regions’.

The garbage barge floats in New York Harbor with the World Trade Center towers in the background on July 22, 1987. Credit:Newsday / Ken Sawchuck

The Brookhaven Town landfill — the largest and one of the last primary municipal landfills on Long Island — is set to close in about eight years, potentially increasing the reliance on shipping waste away.

“This crisis is going to grow,” said Brookhaven Town Supervisor Edward P. Romaine, who was a Suffolk County legislator when the Mobro 4000 first left port. “It’s going to make the garbage barge pale by comparison.”

Waste disposal experts and local officials said that there are no easy solutions to Long Island’s trash problem, and that recycling by itself is not a cure. And some warn that complacency about trash disposal could lead back to conditions that helped create the garbage barge debacle.

“I am well aware that we are approaching a crisis in waste in Long Island,” Basil Seggos, New York Department of Environmental Conservation commissioner said at a Long Island Association meeting this month. “We’ve got a great investment in recycling, but at some point, we’re going to need to make tough decisions.”

In 2014, East Hampton, Southampton and Southold were in crisis as a shortage of long-haul flatbed trucks coming to Long Island caused at least 4,000 tons of garbage to pile up. The trash eventually was trucked to Brentwood, where it was loaded on railcars and taken to Kentucky for disposal.

Long Islanders generate an estimated 7 pounds of solid waste per person per day. The national average is 4.5 pounds, said Swanson, an associate dean at Stony Brook’s School of Marine and Atmospheric Sciences.

Tons of recycled and unrecycled waste

Tons of recycled and unrecycled waste in the big towns

And tons of recycled and unrecycled waste in the smaller towns

Because they have smaller populations they produce less waste overall. (Note the different scale from the chart above.)

How much recycling per person

Another way to gauge recycling is to look at the number of pounds of solid waste that are recycled daily per residents. Here are the figures for Long Island towns (Fishers Island reports separately from Southold Town).

A crane at Covanta's waste-to-energy plant in Westbury moves around garbage that has been unloaded from trucks and is brought here into the garbage holding area, waiting to be incinerated on March 13, 2015. Credit: Uli Seit

Long Island trash disposal is heavily dependent on incinerators, and the landfills that store the ash created by those facilities.

The four Covanta Energy Corp. plants in Hempstead, Huntington, Babylon and Ronkonkoma process 1.8 million tons of waste each year and recycle about 50,000 tons of metal annually. In Hempstead, the heat generated from incineration turns water into steam to power a turbine that produces electricity. That ash is sent to the Brookhaven landfill.

Recycling programs on Long Island vary as towns, cities and villages use a hodgepodge of methods for solid waste collection. Most contract with carting companies for curbside waste and recycling pickup, but in some smaller towns, such as Southold, residents take their trash to a town dump site.

Many public officials, waste industry leaders and environmentalists say Long Island is far behind other areas of the country in terms of recycling. But there is no universally accepted method for calculating how much material is recycled, making region-to-region and even town-to-town comparisons difficult. Yard waste and manure — which can be composted or used as fertilizer — are counted in some areas, while old vehicles that are sold or donated are counted as recycling in others.

In its 2010 “Beyond Waste” report, the state focused on solid waste generated per person per day as a way to measure the effectiveness of waste-reduction efforts. At that time, the average per-person amount of waste each day in New York State was 4.1 pounds, with reduction goals set at 1.7 pounds by 2020 and 0.6 pounds by 2030.

Solid-waste reduction requires a range of programs, from managing electronic waste and household hazardous waste to repurposing items, Seggos said. The state is also focusing on revising regulations governing composting, as well as the disposal of mulch, and construction and demolition debris, he said.

The state does not set regulations about what materials should be recycled and instead leaves it to municipal planners to decide what is best for their community, DEC officials said.

Several towns have moved to “single-stream recycling” in which all recyclable materials — paper, glass, cardboard, plastic, metals — are collected together. Putting all items in one container for pickup makes it easier for residents and has led to double-digit increases in the amount of material recycled, officials say.

Other town officials cite potential contamination — such as paper shredded by broken glass or soiled by soup and soft drinks — in single-stream collection and continue to require residents to separate their recyclable items. National studies show as much as a third of contaminated recyclables still end up in dumps.

In most of New York State, counties report solid waste plans to the DEC that detail efforts to reduce waste, reuse items and recycle. On Long Island, individual towns and cities, not Nassau or Suffolk counties, manage the programs and reports without regional oversight. Seggos said a more unified approach was worth evaluating.

Bales of recyclable paper are loaded onto a truck at Green Stream Recycling's Brookhaven single-stream recycling facility on May 3, 2016. Credit: Newsday / Thomas A. Ferrara

“You have a regional problem that demands regional action,” he said. Barges are unlikely to be part of the solution when the Brookhaven landfill’s useful life ends, said Holbrook attorney Michael Cahill, a counsel to Islip Town during the Mobro 4000 saga and today. No port on Long Island is large enough to handle that kind of barge, he said.

Instead, Long Island will need to consider rail and truck transport of its trash, he said.

“You can see these crossroads approaching and we’ve got to figure out what to do,” Cahill said.

Gov. Andrew M. Cuomo’s proposed 2018 budget has a provision requiring food waste be diverted from landfills by composting, donating edible items, converting it into fuel and incorporating other measures.

The provision, if approved, would take effect in 2021.

The regulation would apply to large institutions such as hotels, nursing homes, “big box” stores, supermarkets and jails that produce at least two tons of food waste per week.

What was it like to chase LI's garbage barge?

A report prepared this month for the New York State Energy Research and Development Authority estimated that hospitals, colleges, nursing homes, supermarkets, motels and restaurants produce more than 416,000 tons of food waste annually. Diverting that waste from landfills by 2021 could save $22 million each year, the report said.

Additionally, removing food from the waste stream would reduce the amount of methane gas produced by decomposition, removing a greenhouse gas that traps heat in the atmosphere and has been linked to climate change. 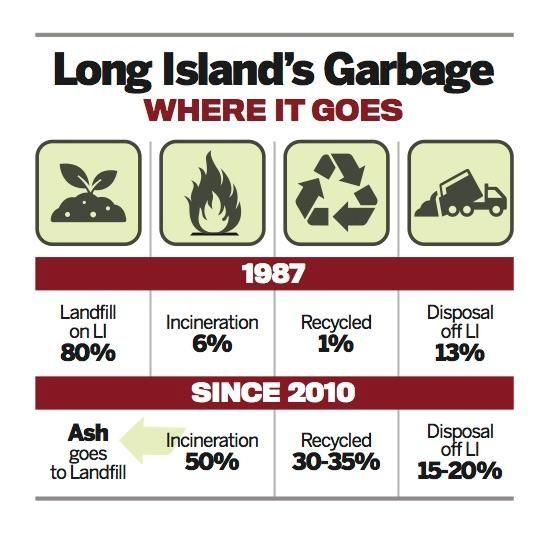 “This is obviously a waste issue,” New York Department of Environmental Conservation Commissioner Basil Seggos said. “We throw so much food away. We have so many people that are hungry in New York, nationally.”

Additionally, Seggos said, the state is focused on revising regulations governing the disposal of mulch, and construction and demolition debris, as well as composting. He called that concern long-term, not imminent.

“It is something, in my mind, we have enough time to plan for,” Seggos said.

March 22, 1987: Mobro 4000, pulled by the tugboat Break of Dawn, leaves Long Island City with 3,186 tons of trash. Over the next two months: Rejected by North Carolina, Louisiana, Texas, Florida, Belize, Cuba and Mexico.

Mate David Soto talks on the radio telephone to passing boats who called the 'Break of Dawn' to wish them well on May 16, 1987. Captain Duffy St. Pierre stands beside Soto. Credit: Newsday / Dick Kraus

Students from the Brooklyn School for Special Children protest outside their school against burning garbage from the barge on Aug. 28, 1987. Credit:Newsday / Liliana Nieto

Sept. 1, 1987: First truckload of ash from that waste deposited in Islip Town landfill.