Patricia Smith was in diapers when her mother, NYPD Officer Moira Smith, 38, was killed responding to the World Trade Center on 9/11. Officer Smith was last seen pulling victims from the towers before they collapsed. Patricia, now a student at the University of Alabama, reflects on her life in photos taken after the loss of her mother. Credit: Vasha Hunt

For Patricia Smith, daughter of the only female NYPD officer killed on 9/11, the local news has served as a kind of family photo album.

Since age 2, Smith’s image has been splashed across newspaper front pages and on TV, as annual ceremonies have honored her mother, Moira Smith. The East Hampton resident, now 18, grew up a symbol of 9/11’s devastation.

But Smith doesn’t mind. It’s become an act of love to share her mother’s story and an exercise in memory to hold onto the photos and news clippings.

“I look back at those photos with my dad and aunts and uncles, and they share the stories with me so I feel like I have those memories,” she said.

Smith began the next chapter of her life this August as a freshman at the University of Alabama in Tuscaloosa.

Ahead of her first 9/11 anniversary there, she reflected on her life in photos.

September 2001A mom and a hero 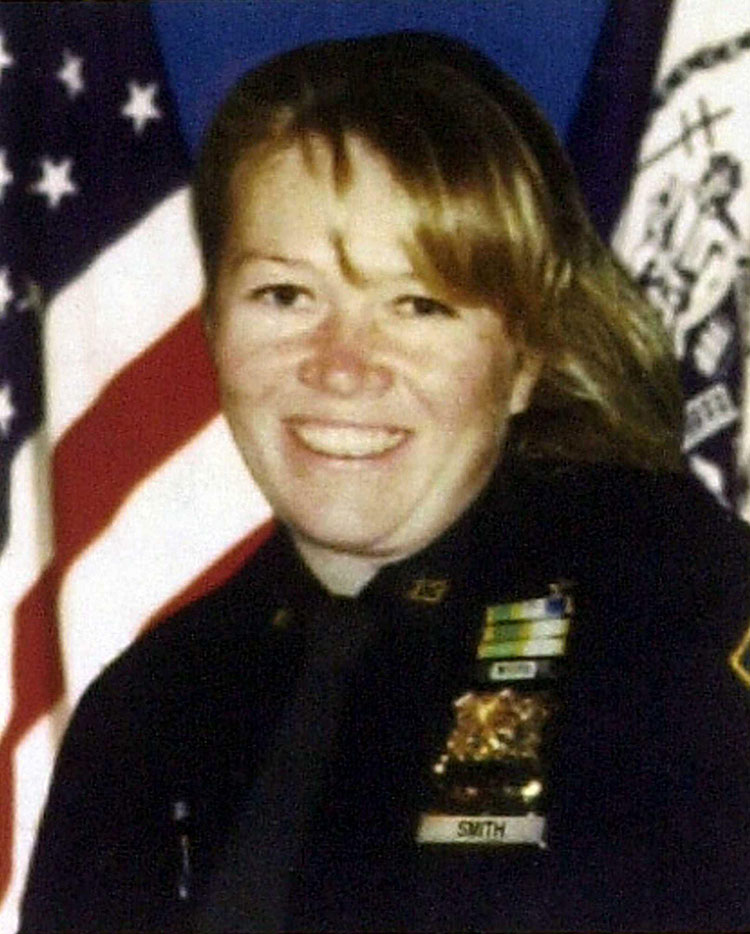 Smith is counted among 3,000 children who lost a parent when the Twin Towers were struck in 2001. She was in diapers at the time and as she grew older, she faced a challenge: How could she get to know a mother she couldn’t remember?

Moira Smith was born and raised in Brooklyn. She joined the NYPD in 1988 and quickly became a decorated officer, rescuing people from a 1991 subway crash that earned her a Distinguished Duty Medal.

She was outgoing and she liked taking road trips. She loved being a mother to Patricia, who was born in 1999.

“Thanksgiving is huge and St. Patrick’s Day is huge in my family,” Patricia said. “We’d be sitting at the table and people would be telling stories and my mom was always in them. She was always at the center, she was the life of the party.”

Then comes the part that’s taken Patricia years to accept. NYPD Officer Moira Smith gathered a group of her fellow officers and raced to the Twin Towers. She was last seen pulling victims from the towers before they collapsed. She was 38.

“When I was younger, it was always this happened to me and happened to my family. Why?” Patricia said. “But this didn’t just happen, that’s who my mom was. She wasn’t going to turn a blind eye.” 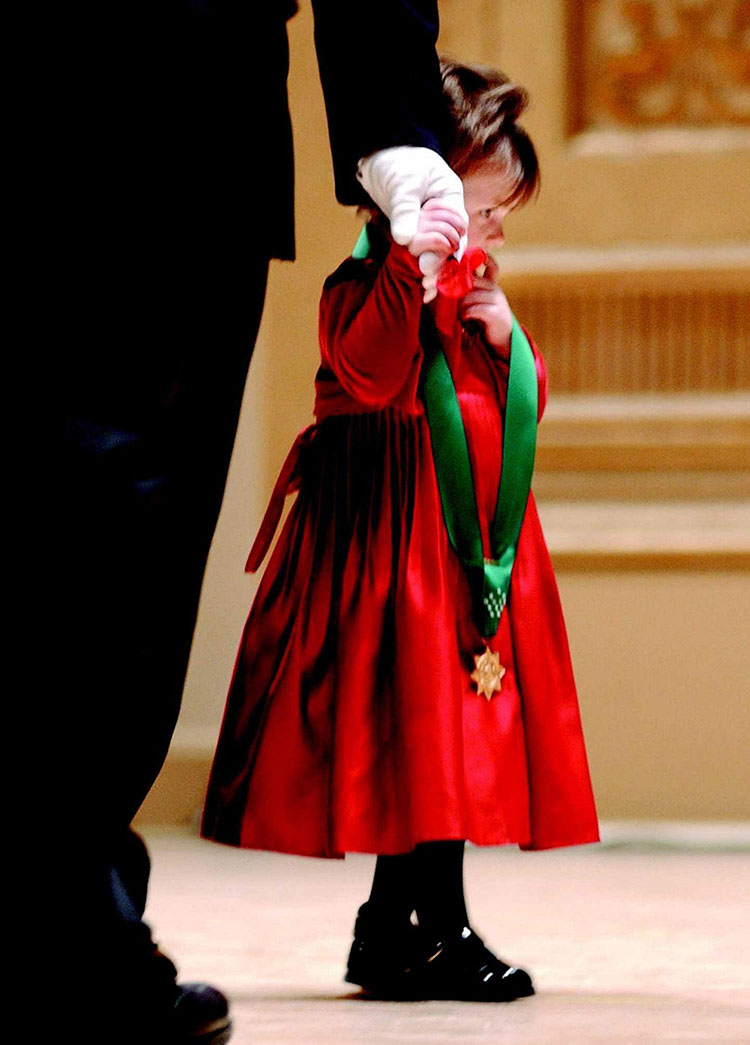 It was Patricia’s red velvet dress that captured the attention. On Dec. 4, 2001, she accompanied her father to Carnegie Hall for an NYPD medal ceremony, where Mayor Rudy Giuliani presented her with her mother’s gold medal.

The photo was one of the first published of Patricia and one of her favorites.

She has fuzzy memories of getting ready, of having her hair curled and done up with a big red bow to match her dress. She and her father were supposed to walk out in front of the crowd. It was a serious event, but one she didn’t understand at the time.

“We were waiting at the stage entrance and I ripped the bow out of my hair, my nice hair, and handed it to my dad,” she said.

James didn’t have anywhere to put it. Seconds before the ceremony began, he wrapped it around his fingers as he held Patricia’s hand. The photo now hangs on the wall in her father’s home. 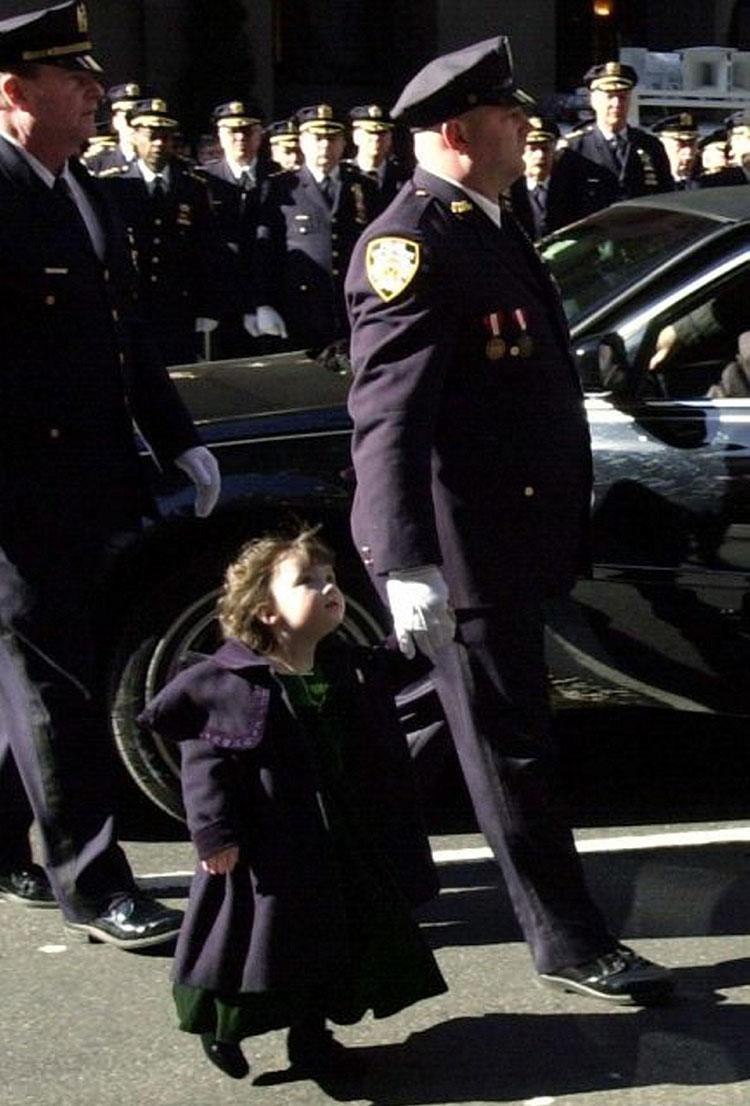 The Smith family held a memorial service for Moira Smith at Saint Patrick’s Cathedral in February 2002, the month before her body was recovered.

It was on Valentine’s Day, Moira’s favorite holiday and birthday, and the turnout was enormous. The size of the church also dwarfed little Patricia.

She remembers being struck by the enormity of the crowd, the hundreds of police officers dressed in blue.

“It was shocking. I didn’t understand at that point why they were all there,” she said.

As an adult, the memory means more to her now, she said. “I came to realize that was her family, and it’s our family too,” she said. “They had our back the whole time.” 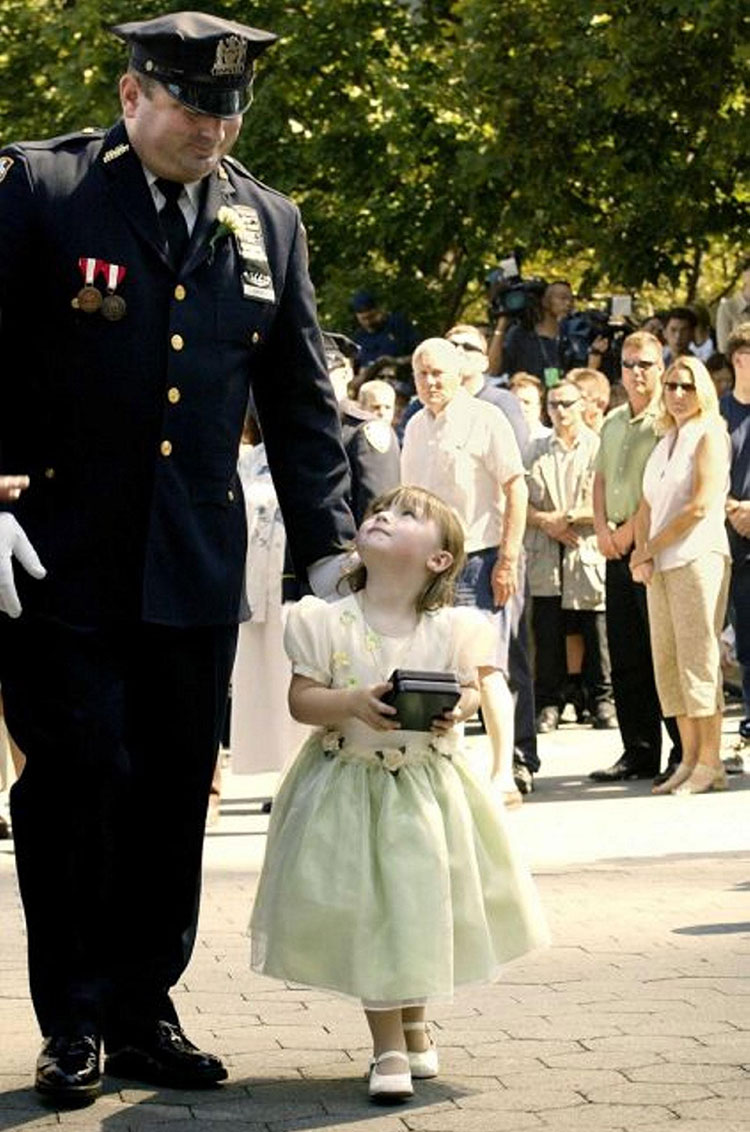 For Patricia, losing a parent at a young age has meant that family photos mean more.

Nearly a year after the attacks, Patricia and her father attended a memorial service for officers killed in the line of duty. On Sept. 9, 2002, officials added the names of the 23 NYPD officers who died to a memorial wall.

“It’s weird, this one kind of makes me happy because I don’t have too many full family photos of me, my mom and my dad,” Patricia said.

James Smith let a 3-year-old Patricia hold onto a replica of her mother’s badge in a wooden box during the ceremony.

“Holding the badge, that was her, she was there with us,” Patricia said.

“It might not be a full family photo, but it has that feel. It’s definitely a picture that’s pretty special.”

September 2006'There were lots of tears' 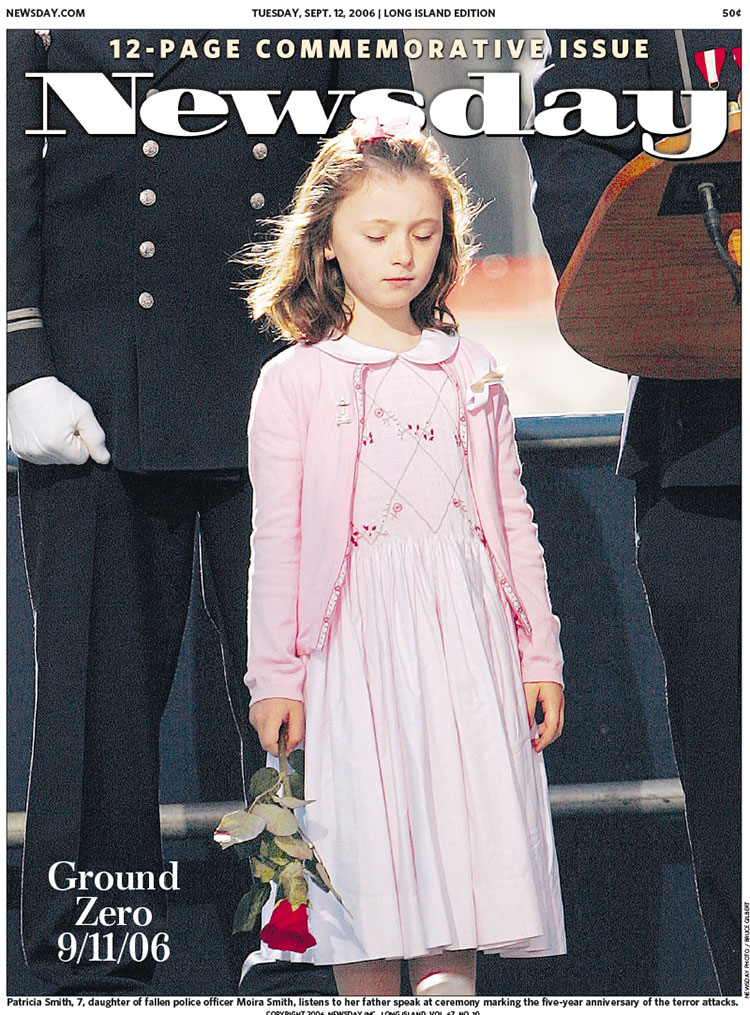 As Patricia grew to be a young child, she started to recognize that other families didn’t look like hers. Losing her mother stung in a way it hadn’t before. The attention and crowds had become an overwhelming reminder of Moira Smith’s absence.

Patricia clung to her father’s side when she needed comfort. But that wasn’t an option on Sept. 11, 2006, when he spoke at a five-year memorial service at Ground Zero, she said.

Patricia, then 7, remembers worrying about having to sit alone when he got up to speak. She was allowed to follow James on stage, but couldn’t hold his hand during the speech.

“He was my security blanket,” she said. “I was too afraid to look out, so that’s why I’m looking down and holding the flower.”

The somber photo of Patricia standing alone graced front pages, transforming her once again into a symbol of 9/11’s losses. But the image is significant to Patricia for an additional reason: “This was the first picture I remember being sad.”

Patricia said her childhood was marked by being part of a family in mourning, even five years after her mother’s death.

“Everything was really raw and people were still trying to come to terms with it. There was a lot of tears,” she said.

After each memorial event, Patricia and her family would all head to a restaurant for a big meal, a way to celebrate Moira and end the day on a happier note. 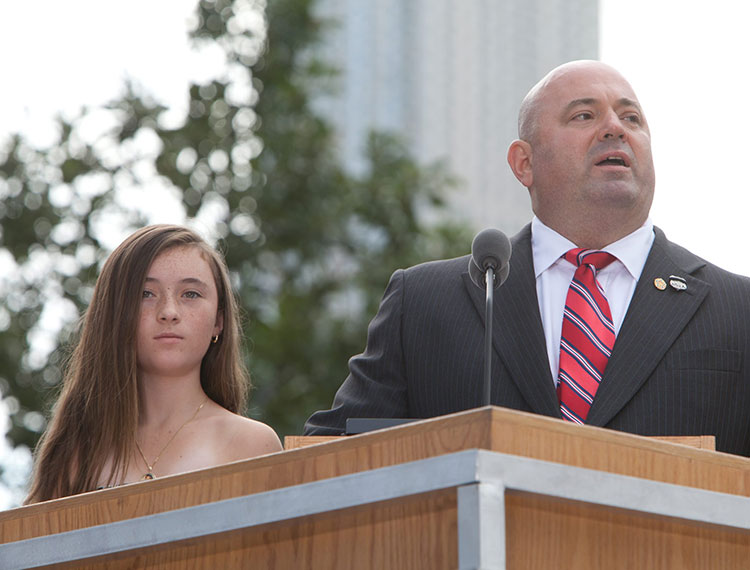 As a young preteen, Patricia retreated from the spotlight for some time. The ceremonies year after year blended together.

“I went through a period where I didn’t want to talk to anybody, not newspapers or shows or anything like that,” she said. “I was just tired of repeating the story and having to rehash the emotions that came with it.”

Something changed after she turned 12, she said. She was offered the chance to speak at a 10th anniversary memorial service in 2011, and she agreed. It proved to be a turning point.

“I don’t know if it was a specific point that things changed, but this moment I think I fully realized it,” she said. “I was standing there and I was looking at a huge crowd of people and I was proud to be there.”

She doesn’t remember what she said, but she felt a sense of peace after her speech ended.

“I remember coming off the stage and I took a deep breath,” she said. “I knew we were representing my mom and the sacrifice she made. I felt we were standing up for something she would have wanted.” 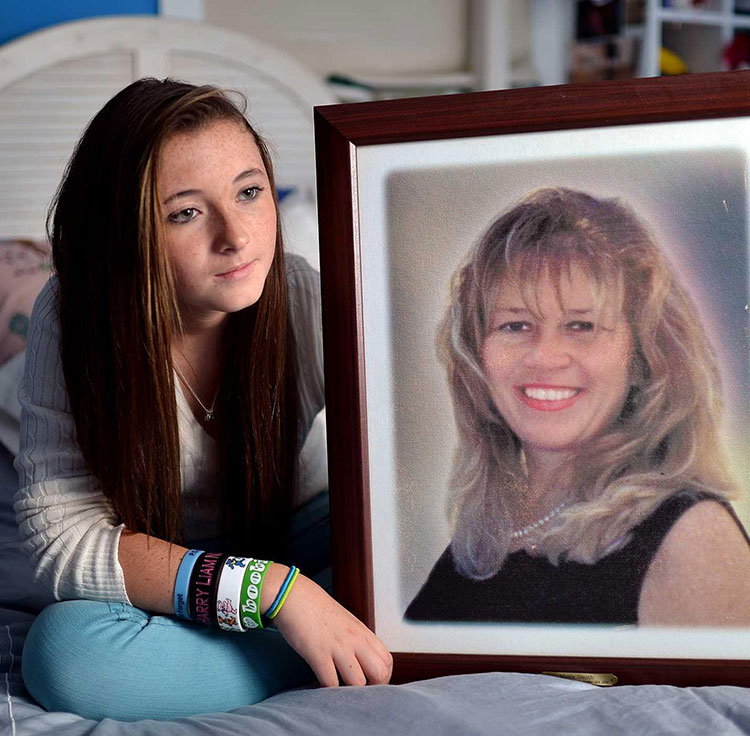 Patricia and her father were the subject of a Newsday article in 2012.

It’s not easy to see photos of herself during her more awkward preteen years, Patricia said. She was 13 when a photographer snapped a photo of her in her East Hampton bedroom.

The shining star of the photo is her mother, she said. When the Smiths think of Moira, they picture her like this: smiling and in pearls. The photo of Moira is a universal favorite among their family members, Patricia said.

The Newsday story was the first time Patricia was given the opportunity to talk just about her mother. Not Moira the police officer or Moira the victim, just Moira the mom, who loved to laugh and doted on her daughter.

“This was more about talking about my mom as a person and not just a police officer. She is that but she’s much more than that too,” she said. “The smile captures who she was.”

Once she felt a sense of duty to share her mother’s story, Patricia knew it was important to share her family’s fight for justice for 9/11 victims, too.

In May 2017, she and her father flew to Guantánamo Bay, Cuba, for the start of pretrial hearings of five detainees U.S. officials said were involved in planning 9/11.

She’d been offered the chance to go once before, but was on a service trip in Cambodia at the time. When the opportunity arrived again in 2017, Patricia said yes.

“At that point, going to Guantánamo, that was more for me and my family,” she said.

She rehearsed how she’d respond to seeing the five men. She tried to shake her jitters.

“I was handing my passport over to security going on the plane and I was shaking,” she said.

She was only there to observe the proceedings but it was a powerful moment, she said.

“I didn’t cry, I didn’t have a reaction because I didn’t want to give them a reaction,” she said. 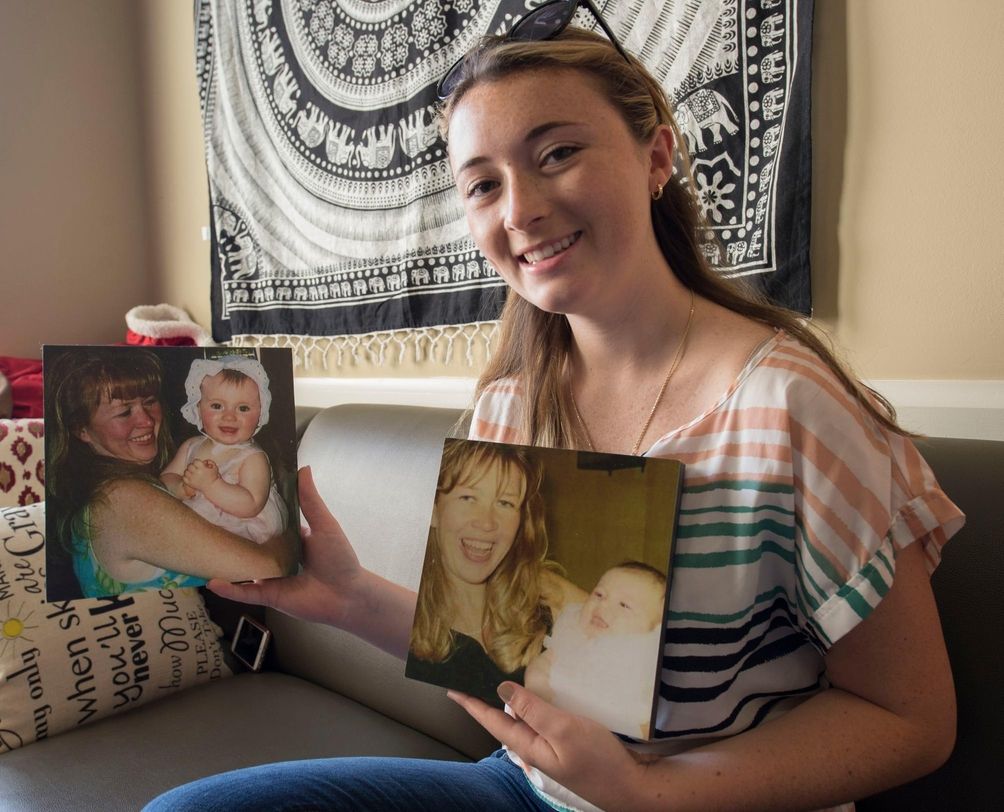 In August, Patricia moved to Alabama to start college, and she’s settled into her dorm.

Among cheerful pillows and elephant tapestries, she brought memories of Moira with her: photos of her mother holding Patricia as a baby, a necklace with Moira’s name.

Each Sept. 11 is a solemn one, but Monday’s will be different, a new marker on Patricia’s personal timeline. She’s had some experience reflecting alone on the anniversary of the attacks, but this time, she won’t be in New York.

“I’ve never been in a different state by myself on Sept. 11,” she said. Alabama is different from New York, she said. People don’t talk about 9/11 the same way they do on Long Island.

“I haven’t heard anything about it yet here,” she said. “I know New York, New Jersey, Connecticut, we have strong connections to 9/11. I just figured people would be more reactive here.”

She will share her mother’s legacy through a few media interviews that day, and she plans to spend the evening with her new friends.

“My dad and family are big believers in celebrating my mom’s life,” she said. “We always ended the day on a positive note.”