Brentwood:
This is our home

Four Brentwood families of diverse backgrounds shared their lives with Newsday for more than a year — a window into the hamlet that received national attention because of slayings that authorities have linked to the MS-13 street gang. Reporter David Olson and photojournalist Alejandra Villa Loarca chronicled the perseverance, pride and strong sense of community among these families as they look to the future.

Their slayings in September 2016, allegedly by members of the MS-13 gang, cast Brentwood in a harsh light.

Federal and local authorities arrested and deported hundreds of suspected MS-13 members, and the state and county poured money into gang-intervention and social service programs. Police ultimately linked nine killings in Brentwood from 2014 through 2016 to MS-13, and one since then.

Residents say Brentwood, which FBI and Suffolk statistics show has a lower violent-crime rate than the country and the state, has been stereotyped because of gangs. The perception of a community under siege doesn’t match the reality of their everyday lives, they say. Brentwood is where they have raised their children. It is their refuge. It is where they have put down roots. And they are committed to it.

“It’s not what was portrayed after Kayla and Nisa back in September, when everybody thought Brentwood was this bad place full of gang violence,” longtime resident Gerri Coleman-Odom says. “Nope. It’s usually just a quiet little place.”

In mid-September, on the two-year anniversary of the girls’ deaths, Evelyn Rodriguez, Cuevas’ mother and an outspoken anti-gang activist, was fatally struck by an SUV in Brentwood after a dispute with the driver over placement of a memorial to her daughter. The driver was indicted Nov. 30 on three charges, including criminally negligent homicide. She pleaded not guilty.

Longtime Brentwood residents who agreed to share details of their lives with Newsday over more than a year acknowledge they are more cautious and vigilant, especially about their kids. However, parents say their lives – and those of their children – are not defined by the gang. They passionately defend Brentwood as a close-knit community where people look out for each other, and where residents of different races and ethnicities live side-by-side in harmony.

Documentary: This won’t define us

Newsday followed four Brentwood families for a year, and they say MS-13 gang violence won’t drive them from the community they love. Resident John Rueb raised his family in Brentwood. “We’re not going anywhere,” he said. Credit: Alejandra Villa Loarca

When the weather is nice, Salvadoran immigrant Elida Alfaro, 32, and her six kids walk a few blocks to the playground at North Elementary School, where the children spend two or three hours enjoying the slides and swings.

After Kayla and Nisa were slain, trips to the park stopped. They stayed inside more. Alfaro says she was scared.

“Now, we feel more secure, because police or security is always passing by,” she says. 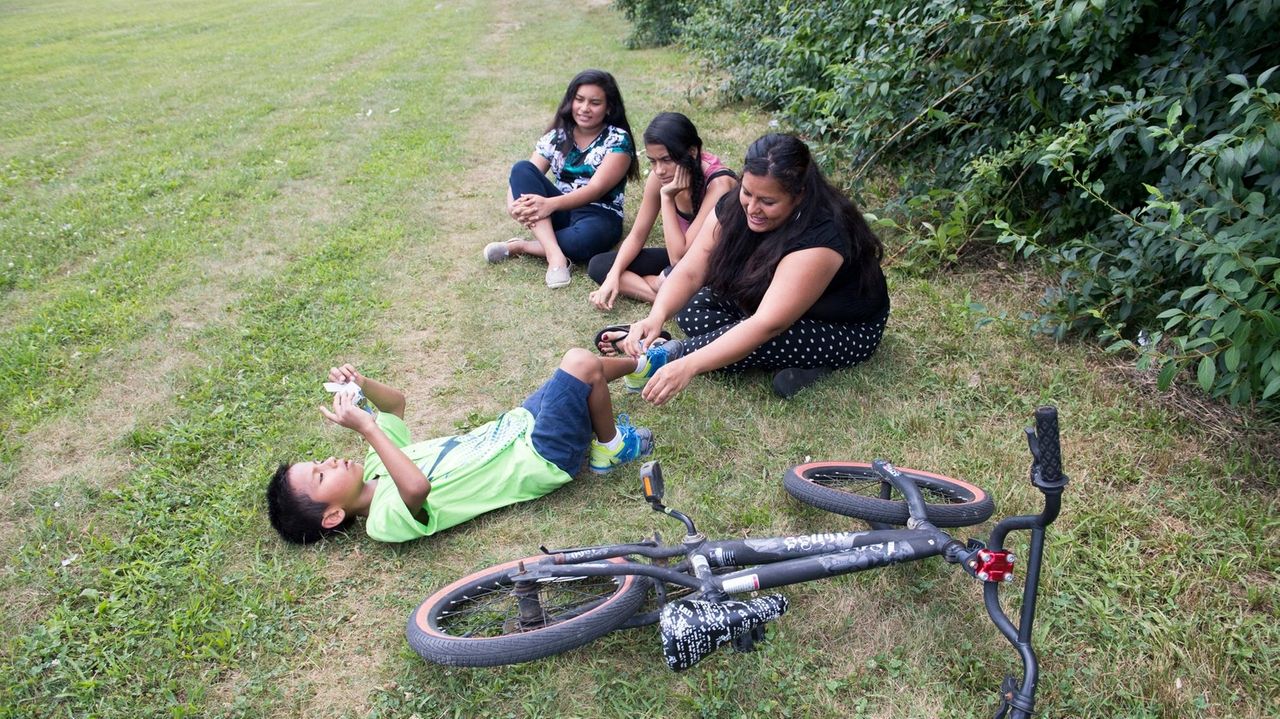 Elida Alfaro with her children in a park in Brentwood. Photo credit: Alejandra Villa Loarca

She has lived in Brentwood more than 13 years and, since 2014, has had a U visa, which is issued to victims of domestic violence. The visa is up for renewal next year.

Alfaro likes her north Brentwood neighborhood. It’s quiet, there are other Salvadorans living nearby, and her mother rents a basement room several blocks away.

She remains anxious about the safety of her children, ages 8 to 16, and has imposed some restrictions, not allowing them to leave home without her except to go to school. She focuses on her hopes for them and a future filled with possibility.

“What I want is that they have careers,” she said as two of her daughters sat at the living room table doing homework. “If they fall into the wrong crowd, there won’t be a future for them. That’s why I look over them so carefully. I didn’t bring them here from El Salvador so they waste their lives. I brought them here so they can have a future, so they can fulfill their dreams.” 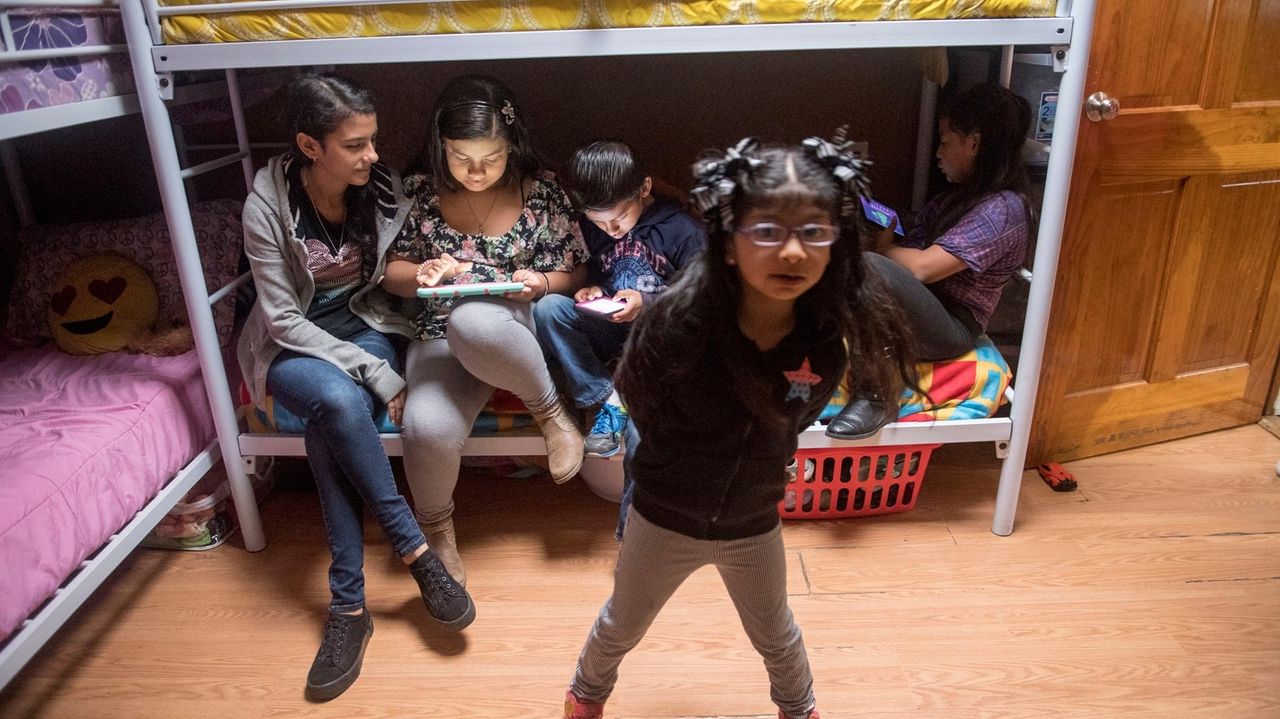 Five of the six Alfaro children in their bedroom in Brentwood. Photo credit: Alejandra Villa Loarca

If Alfaro and her children were in El Salvador, life would pose far more risks, she says.

Her father was killed there in 2015. Tamara, her 14-year-old daughter, recalls how while in El Salvador in 2012, she witnessed gang members kidnap her aunt’s boyfriend, whose dismembered body was later found in a ravine.

Alfaro says if she is granted permanent residency in the United States, “I’m going to stay [in Brentwood] until I die.”

John, 51, chief custodian at North Middle School in Brentwood, said in that era, disputes were settled with fists, not guns and knives.

The couple say they’re frustrated that many know Brentwood only for the crimes committed by a small fraction of the community. “I raised two fantastic kids in this town…,” Valerie Rueb says. “But you don’t hear about that. You only hear about MS-13 ravaging our neighborhoods.”

The Ruebs’ decision to live in Brentwood is rooted in the hamlet’s diversity. They wanted their daughters, Madison, 19, and Michelle, 26, “to know people who have a different skin color than them,” Valerie Rueb says. 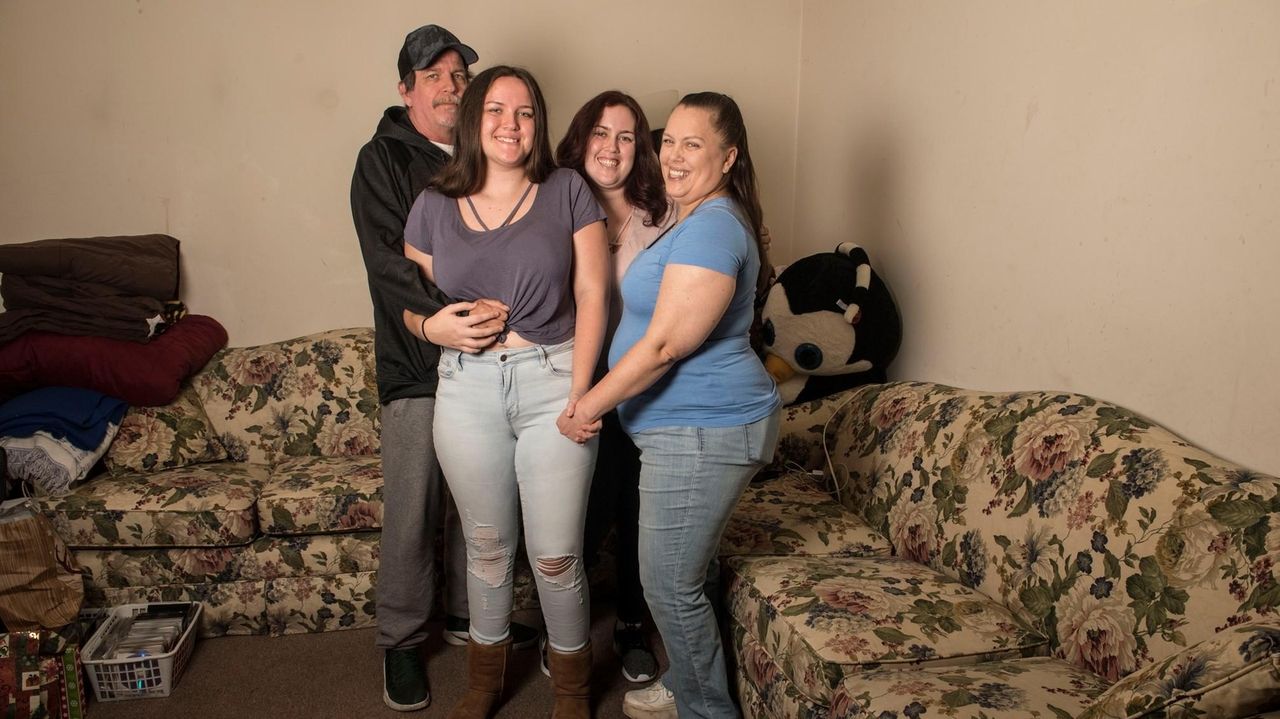 They have borne witness to the evolution of Brentwood over the course of their lives.

In 1980, when John and Valerie Rueb were young, Brentwood was more than two-thirds white non-Hispanic. Today, it is nearly two-thirds Latino, 14 percent black and about 18 percent white.

Madison, in her second year at John Jay College of Criminal Justice in Manhattan, wants to become a police officer. She believes living in Brentwood will make her a better cop.

“If more people were to have that experience of living in a diverse community all their life, they wouldn’t have all these biases,” she says.

John Rueb spends many nights and weekends coaching youth basketball – two girls’ traveling basketball teams and a developmental program for boys and girls 14 and under. 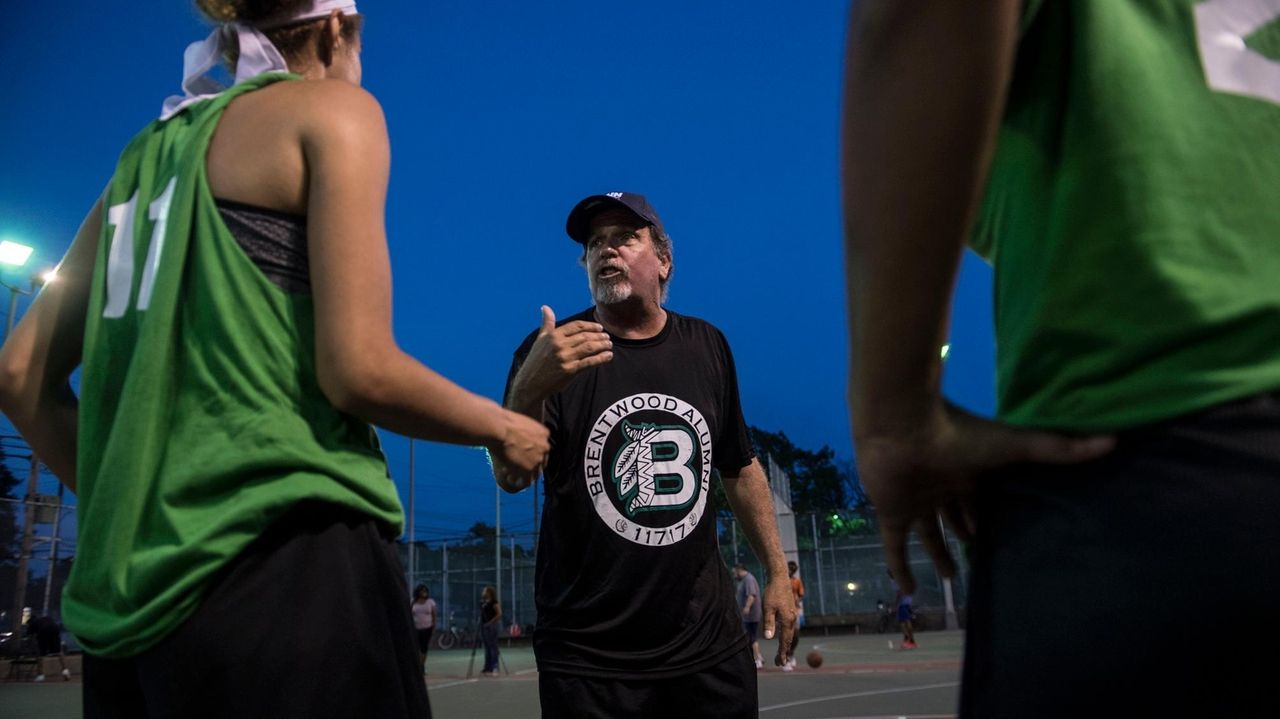 At one practice, Carol Key watched her daughter, Jade, then 13, and expressed gratitude for the team.

“From 6:30 to 9, they’re not on the streets,” she says. “She eats, does homework and comes here. Otherwise, idle minds lead to bad things.”

Kayla and Nisa were on John Rueb’s team for five months in 2015 before they quit.

When they were killed, “that was the final straw,” he said. “That was the one that was ‘Enough is enough.’ It hit closer to home . . . It was devastating.”

‘It starts with you’

Walter and Jessica Bonilla were “high school sweethearts” at Brentwood High School. Now they’ve seen their son Walter Jr., 18, graduate from the school. Daughter Wendy, 13, is in seventh grade and Winter, 4, will start kindergarten in September 2019. 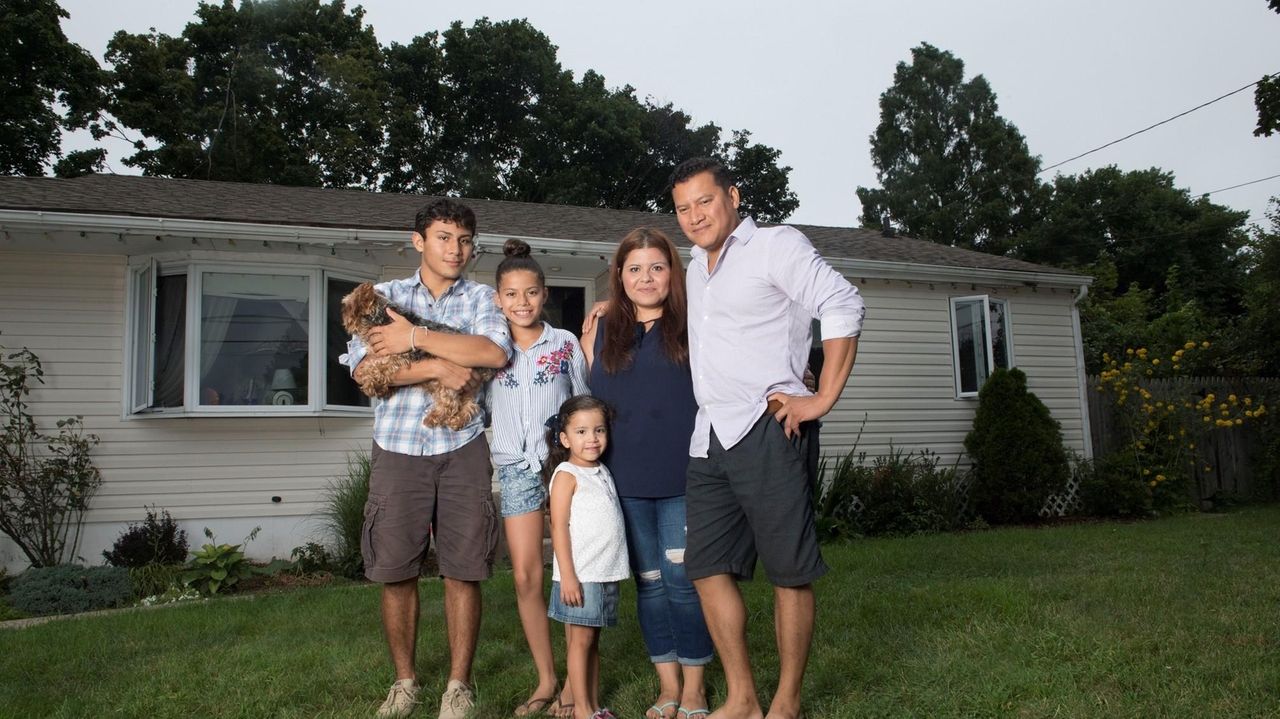 The Bonilla family outside their home in Brentwood. Photo credit: Alejandra Villa Loarca

Walter Sr., 43, a financial adviser and coach, and Jessica, 41, who assembles filters for medical equipment, say they feel comfortable living in the hamlet. Walter Sr.’s 81-year-old mother sometimes walks home at night from her job at a Laundromat a few blocks away.

Jessica Bonilla says that after the slayings of Kayla and Nisa, “I was more on top of my son: ‘Is there anything happening? Let me know. Is anyone bullying you? Did anyone ask you to become a member of a gang?'”

“I tell him you always have to be on the lookout,” she says. “You can’t trust anyone these days.”

The parents say they didn’t want concern for Walter Jr.’s safety to prevent him from enjoying his teenage years. Still, the standing rule was that he call his mom before going anywhere.

While at Brentwood High, Walter Jr. was a good student and a member of the swim team. He says he felt safe at school. He now is studying political science at Suffolk County Community College. 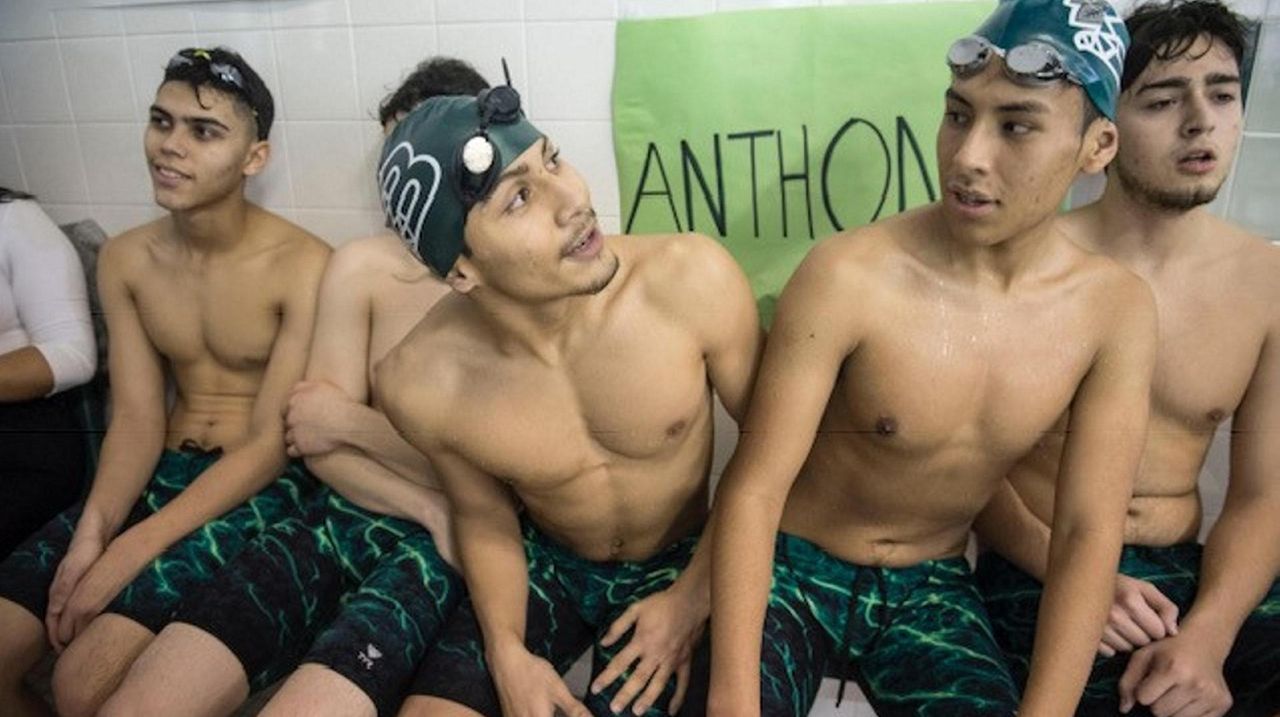 Suffolk police say that MS-13 recruits students at the high school. But Walter Jr. says he never was approached by a gang member.

A year and a half ago, Walter Sr. joined the Guardian Angels, which has patrols in Brentwood.

“Someone has to do it,” he says. “You always ask political leaders, ‘Why don’t you do something?’ But it starts with you first.” 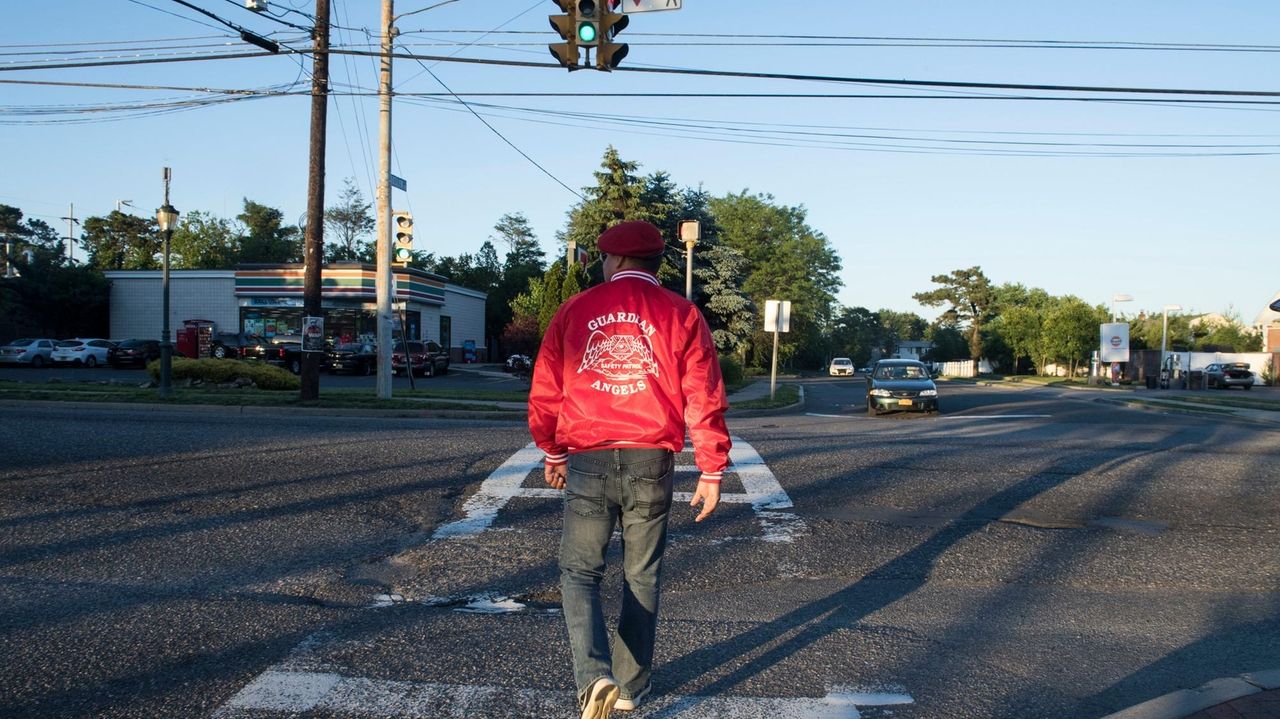 One warm late spring night, he and four other Angels walked down streets off Washington Avenue, introducing themselves to business owners in one small commercial district. They scanned the faces of people standing and walking around, wondering if any of them were gang members scoping them out.

As the five stood in front of a 7-Eleven, Brentwood resident Fulaundra Haynes, who is “over 40,” said that with the increased police presence and the Guardian Angels, she felt safer.

As she got in her car, she thanked them and said, “You guys be safe.”

Gerri Coleman-Odom is a believer in giving back – and that means community involvement by all members of the family.

Coleman-Odom, 50, a nurse, instilled that zeal for helping in her five children, all of whom volunteer, attended summer camps and joined school organizations.

“Parents have to work and kids sometimes are left to their own devices, and that’s why you have to impress upon them to get involved in something,” she says. 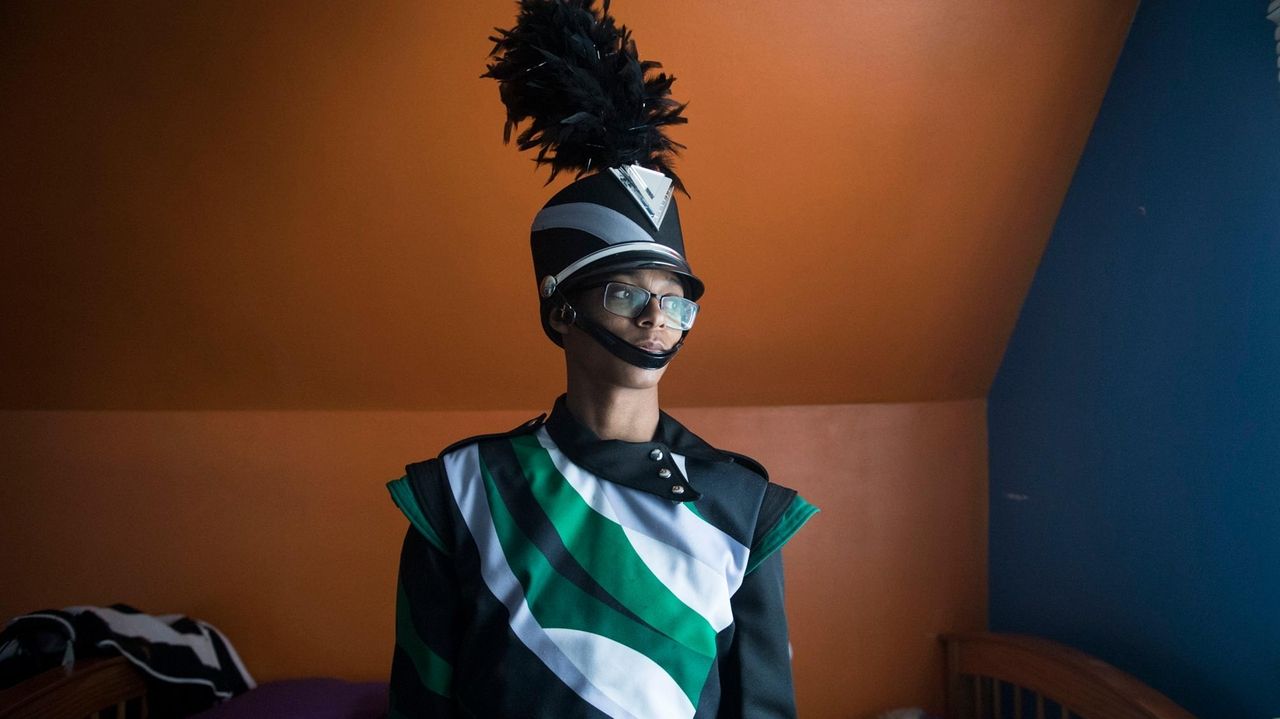 The entire family volunteers every year for the annual Green Machine home show, during which the school hosts bands from the tri-state region for an exhibition and competition.

The show serves as “one of those family bonding moments,” says Coleman-Odom’s son CJ, 19, who was a Green Machine member throughout high school. “We don’t regularly go on vacation and we don’t go out to eat as a family. But we have the home show, we have these little weird moments that we all love that really bring us together as a family.”

After the slayings of Kayla and Nisa, Brentwood school officials warned students to be careful of how they dressed, to avoid wearing clothes and colors that could be considered gang-related.

CJ had just bought a red jacket and, after the district warning, Coleman-Odom says that at first she didn’t want him to wear it.

“Then he slowly transitioned it in,” she says. “It’s not like you go to school and see certain kids wearing all red or something . . . You wear what you want to wear.”

She says her children have received a good education in Brentwood schools. 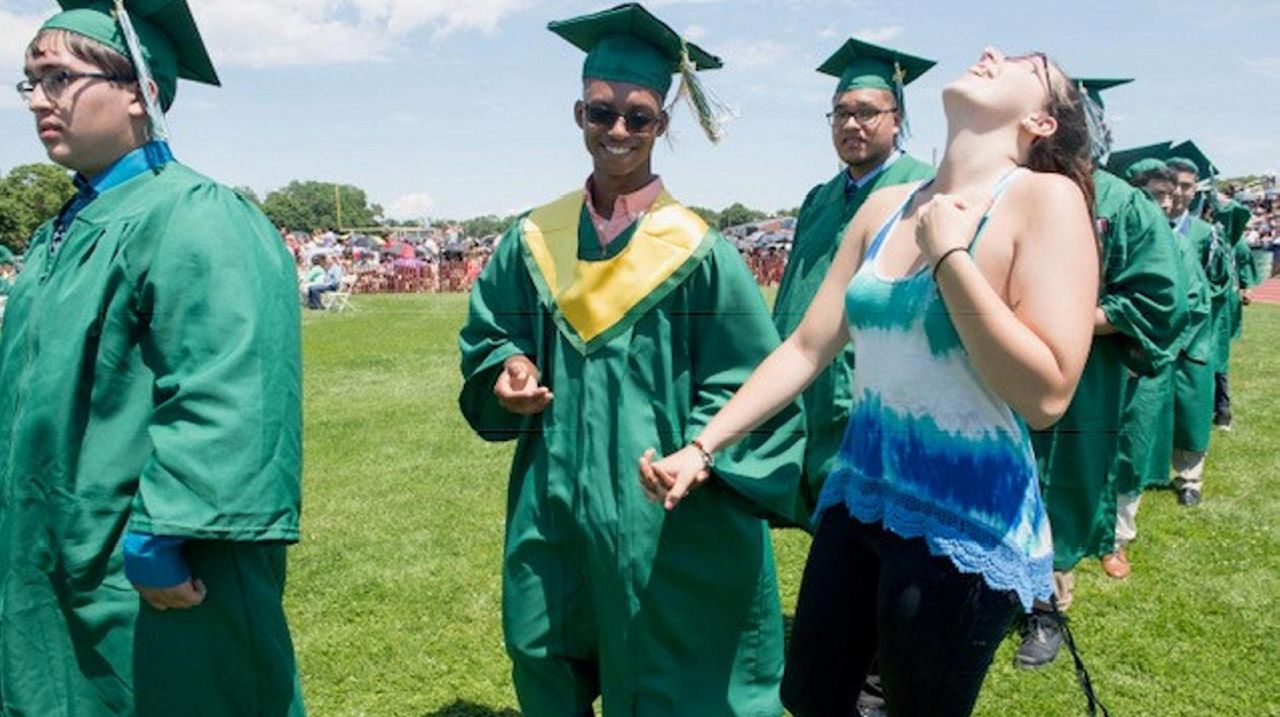 CJ Odom shares a laugh with his friend, Amanda Dicks, who came to support him during his graduation in June 2017. Photo credit: Alejandra Villa Loarca

“All of these kids have had caring, good teachers who have pushed them and who have encouraged them.”

Coleman-Odom and her husband, Curtis Odom Jr., 53, a Nassau County correction officer, moved to Brentwood in 1998. They have no plans to leave.

“We have roots. The kids were raised here, they were born here,” she says. “And I’m still paying off my house. Where am I going to go? And, honestly, I like where I live.”