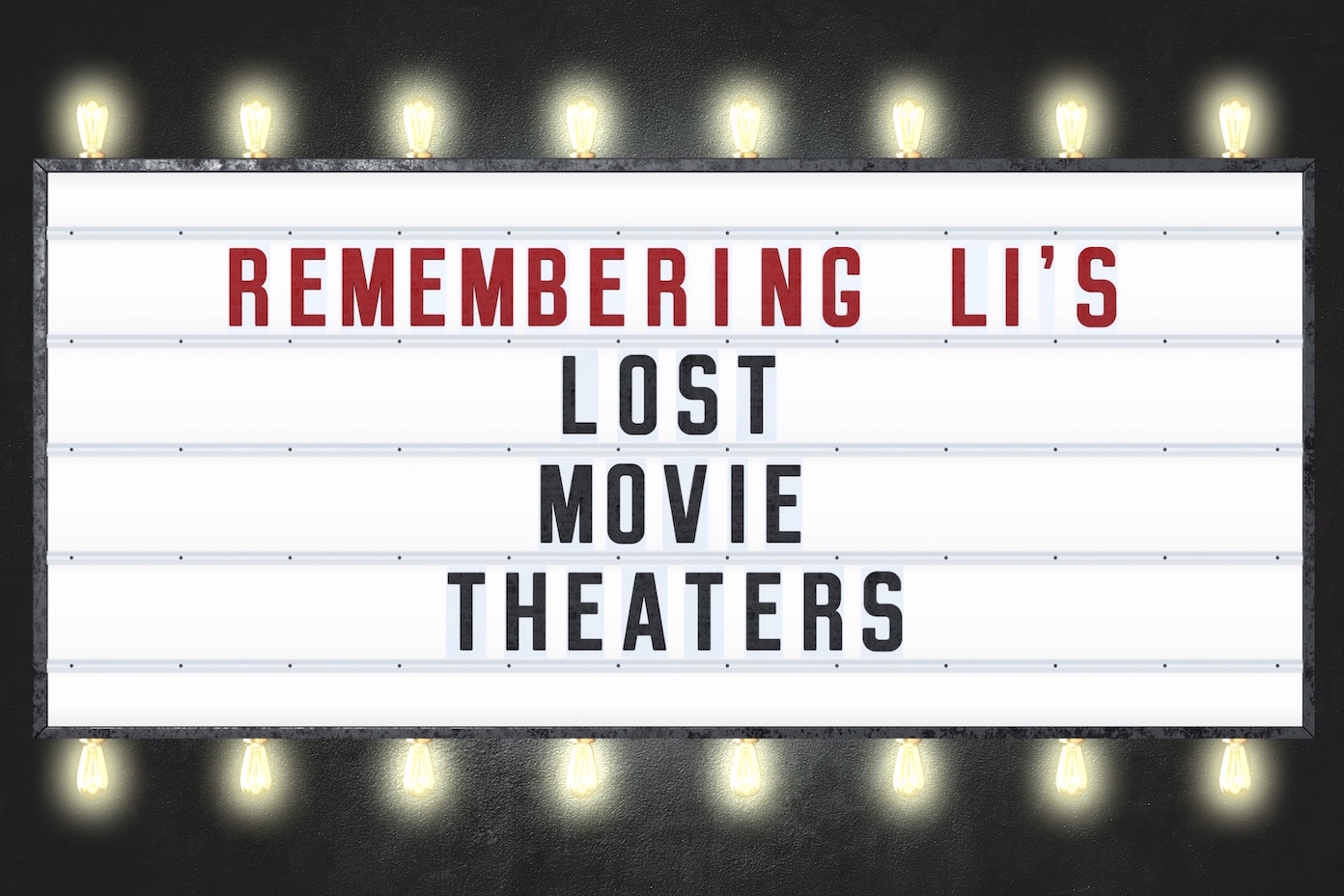 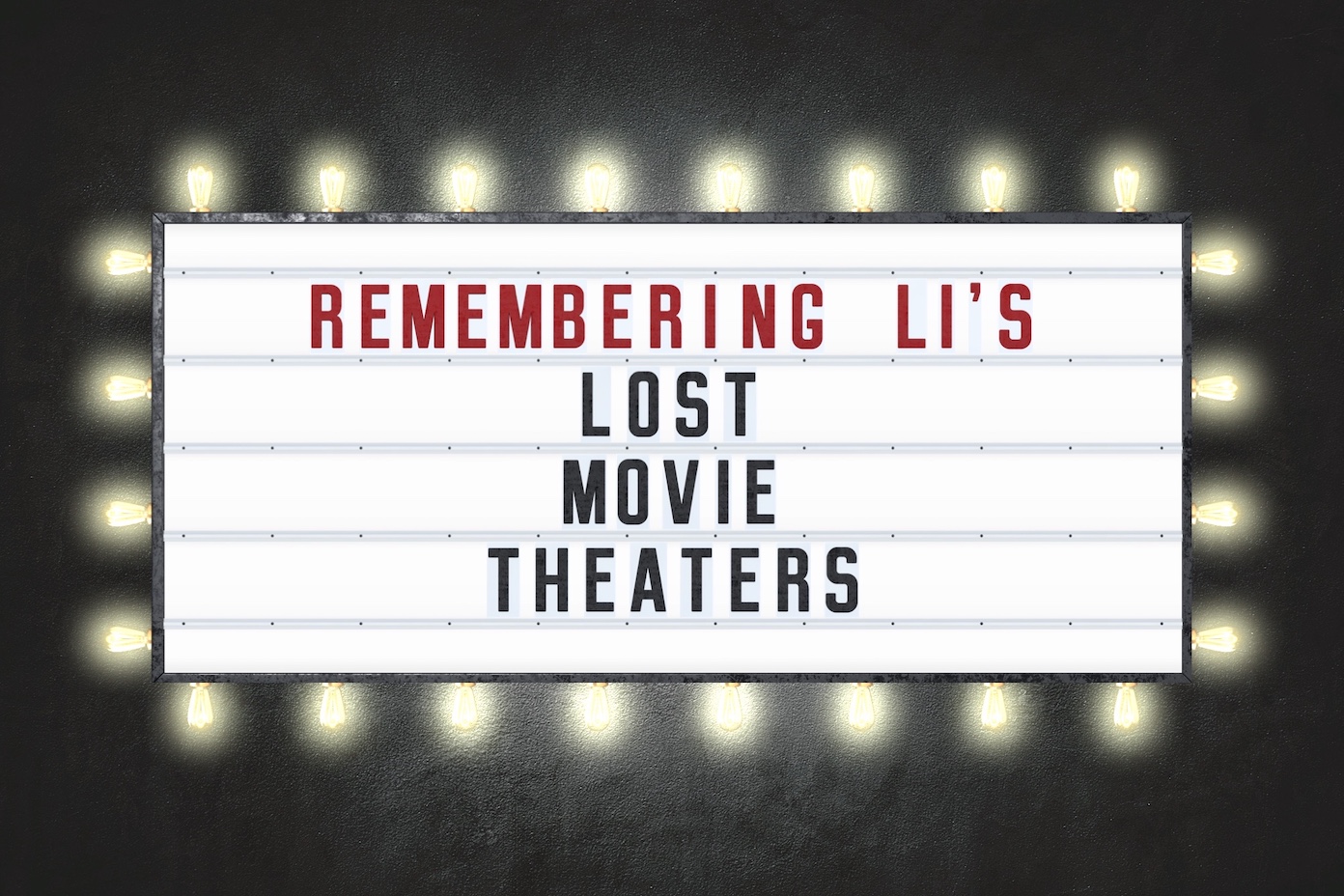 They are Long Island’s lost picture palaces — the single-screen movie theaters that for decades were as much hometown fixtures as the firehouse, public library or all-night diner where you dissected the night’s movie with friends over a burger and cola.

Whether truly palatial with grand prosceniums and balconies or modest shoe boxes with a few hundred seats, they ruled the Long Island entertainment scene from the silent era on, bringing moviegoers together for a few shared hours inside one cavernous, often sold-out theater. And like the Silent Era, Hollywood’s Golden Age and stars who sparkled on their single screens, they are sadly (mostly) gone now.

“If you were lucky enough to have sat in a sold-out movie theater and engaged with an audience of people you didn’t know, you had an experience so many will never live,” said filmmaker and cinema historian Keith Crocker of North Baldwin.

“With multi-screen theaters you often find yourself sitting all alone,” said Rita Hines, 73, of Merrick, a retired Seaford High School English teacher and a longtime movie fan. Hines intentionally saw “The Call of the Wild” (2021), a Harrison Ford movie based on the Jack London tale, at the 300-seat Bellmore Movies and Showplace, the Island’s last surviving single-screen movie theater, founded in 1915. “There were children in the audience and you could feel the communal experience. It was going to the movies old-style,” Hines said.

Ross Melnick, co-founder of Cinema Treasures, an online guide to 56,000 movie theaters around the world, said: “At a single-screen cinema, everyone gathered for the same film at the same time for the same experience. The show, as they say, began on the sidewalk. The buzz began there and continued until the lights went out and the projector whirred.”

Melnick continued, “In an increasingly divided country — especially during the pandemic — there are few venues where you can share a collective experience with others you might otherwise never meet. In the movie theater, for those two hours, differences can melt away.”

Here’s a look at 11 of LI’s single-screen theaters and the moviegoing memories of those who frequented these long-vanished gems.

In the early 20th century, the Calderone name was synonymous with Long Island moviegoing. Sicilian immigrant Salvatore Calderone, who had opened his first Manhattan movie theater in 1907, moved to Hempstead in 1914, founding a small entertainment empire with a half-dozen locations from Valley Stream to Glen Cove — and earning the nickname the “Master Showman of Nassau County,” according to documents in the Calderone Theatre Collection at Hofstra University.

The Calderone Theatre and Concert Hall, one of the chain’s most expensive theaters at a cost of $2 million, opened in 1949, designed by William Lescaze, a pioneer of Modernism in American architecture.

Cinema historian Crocker worked there as a projectionist and said the Calderone “was so large, you really felt like you were in a palace, so whether you were going to a movie or an event, you felt like it was grand.”

Paul Baar, 65, of Islip, went in the 1970s when the Calderone was being turned into a live performance venue. He said the Calderone had a balcony and “was way bigger” than the theater in Babylon where he grew up. “I went to see ‘The Three Musketeers’ (1973) and the next year I went to see Santana,” Carlos Santana’s legendary rock band, he said.

The Calderone family sold the property in 1982 and the building is currently the Faith Baptist Church.

For Baby Boomers coming of age in the 1970s, the Mini-Cinema was the go-to destination for Hollywood classics, concert movies and midnight shows.

Larry Jaffee, who grew up in Kings Park, lined up in 1977 to get into “The Rocky Horror Picture Show.”

Jaffee, 63, a NYIT professor who lives in Washington Heights, remembers a “Rocky Horror” fan asking “whether I was a ‘virgin,’ i.e., encountering the film for the first time. I lied and said, ‘No.'” When the self-appointed gatekeeper demanded to know Jaffee’s favorite scene, he said, “Totally bluffing, I blurted out, ‘All of them!'”

For classic movie fans like Gary Apple, now 66, of Manhattan, the Mini-Cinema was the closest thing on Long Island to Manhattan revival houses like The Thalia (which itself closed in 1987).

Opening in 1961 as The Bethview, and for a time an adult film showcase that closed after a 1969 police raid, the theater shut for good in 1986.

Renamed the Old Bethpage Theater in 1971, it was a favorite of Apple and his friend, Mark Barash, who grew up on the same block in Old Bethpage.

“Gary and I enjoyed going there in part to see horror movies” such as “Frankenstein” and “Dracula,” recalled Barash, 66, a retired TV sportscaster in Pittsburgh.

Barash and Apple eventually figured a way to save the $1.50 admission price, by striking a deal with the theater manager to record the “movie phone,” in exchange for free passes. Apple wrote the scripts, and they both recorded the audio. “We would ham it up, like it was a scary movie.”

Both were off in college in 1977 when the name changed, to Cine-Capri, and remained so until lights out in 1986, according to Cinema Treasures.

The York, which opened on the day after Christmas 1961, offered a rare amenity on Long Island: black-suited ushers who used flashlights to escort guests to their seats.

Dylan Skolnick, co-director of the Cinema Arts Centre in Huntington, remembers seeing “Halloween III” at The York, despite the reviews. “As we were going in people were coming out saying, ‘don’t go in, it’s terrible,’ and of course we went in and enjoyed it.”

Baar said he went to The York “when they were starting to show exploitation movies,” British horror films from Amicus and Hammer studios, and Philippine-American productions starring American actors, such as “Beyond Atlantis” (1973).

The York closed in 1985, according to Cinema Treasures.

If you wanted to see a widescreen spectacular the way the filmmaker intended, this was the place to feast your eyes, fill your ears and blow your mind.

Films were shown in 70 millimeters, on a huge, curved screen, said Skolnick. As a young teen, he attended a rerelease there of the 1968 Stanley Kubrick science fiction epic, “2001: A Space Odyssey.” “We stayed all day long and watched it two and a half times straight through,” he said. “It was spectacular, and the sound was great, six-track stereophonic.”

The theater debuted in 1956 — in a decade when many studios were introducing novel cinema processes — with a benefit screening of the Rodgers and Hammerstein musical, “Oklahoma!” (1955), one of the first films shown in Todd-AO, according to Cinema Treasures. In 1959, it was converted into a three-strip Cinerama theater presenting “This Is Cinerama,” according to Cinema Treasures.

According to Cinema Treasures, this was “a neighborhood house that played double features for low prices. It opened as the Roosevelt Theatre and was renamed Nassau Theatre in 1939 after a refurbishment.”

Nassau Theatre had one of its most successful nights in July 1966, after protesters gathered outside to decry its bill of “obscene films,” according to a contemporary Newsday report posted on Cinema Treasures. In an attempt to placate censors, the management used India ink to paint bras and panties on nude women in advertising posters, and shortened “Days of Sin and Nights of Nymphomania,” to “Days of Sin.” The theater soon switched to G-rated blockbusters such as “Zorba the Greek” and the musical, “My Fair Lady.”In the 1970s it was popular for “blaxploitation” triple features, according to Cinema Treasures.

According to Cinema Treasures, the Amityville theater opened as The Star Theatre in 1913. It was replaced by a new, larger Amityville Theatre in May 1936 with “A Message to Garcia” with Barbara Stanwyck and Wallace Beery.

The theater was luxurious for its era, with air conditioning and a smoking loge. It was demolished in 1960 by a road widening project and replaced by yet another, larger, theatre at the same site.

The huge, family-oriented movie house on the Levittown/East Meadow border offered a triple play for a weekend date or a scout outing. You could roller boogie to an organ soundtrack in the rink at the Levittown Arena, take in a matinee at the Meadowbrook — “Yellow Submarine,” The Beatle’s 1968 animated feature, was a typical family-oriented offering. Then you could walk to Jahn’s Ice Cream Parlor and Restaurant to share a gargantuan “Kitchen Sink” sundae.

Like the era’s other avid Beatles fans, Robin Leidner, 64, who grew up in Wantagh, stood on a long line that “coiled around the building” to see the Fab Four’s debut, “A Hard Day’s Night” (1964). Leidner, a college professor in Philadelphia, said “At seven years old, I was already a fervent Beatles fan. Still am.”

Built in 1912, the original Main Street theater burned down in 1932, and a new theater was built in the adjoining lot, according to a history posted online by the John W. Engeman Theater at Northport.

For Glenn Andreiev of Kings Park, The Northport Theater was an essential part of growing up to be an independent filmmaker. At age 18, on the weekend after he received his driver’s license, he drove a friend to see Ridley Scott’s “Alien” (1979).

“It was pretty packed,” Andreiev said. In “Alien’s” most notorious scene, “The whole theater was going nuts when the alien comes out of his chest.”

Skolnick saw “The Road Warrior,” (1981) there when the theater “was a little rundown,” but the movie looked “spectacular on the big screen.”

One of Hines’ earliest memories involves seeing the Film Noir classic, “Kiss Me Deadly” (1955) at the Sunrise Drive-In when she was 8.

“I was very happy wearing my pajamas outside of the house and getting snacks at the concession stand, and was very intrigued with the concrete slide” at the playground, Hines said. “I also remember being very bored with the movie until the end when she’s opening the suitcase with a bomb” in the film’s famously explosive finale.

Opened in the summer of 1938, the Sunrise Drive-In was noted for its huge, curved screen and a big play park, which drew a stream of moviegoers in automobiles from across the city line. It was the first drive-in theatre in New York State, according to Cinema Treasures.

Crocker recalls sneaking into an age-restricted 1979 double bill of “Dawn of the Dead” and “Meatcleaver Massacre,” by hiding under blankets in a car.

“The line was so long for getting into this film that they didn’t check the car,” he said. The audience was very demonstrative. “Whenever something gruesome happened on the screen, patrons in the cars tended to honk their horns in excitement,” he recalls.

Leidner wore pajamas watching the movie from the back seat of her parents’ car at Melville’s 110 Drive-In — where the capacity was about 3,000 cars.

Leidner said, “The sound from the speaker that hung in a window was usually terrible.”

The Sunrise Drive-In closed in 1979, and was replaced by the Sunrise Multiplex, which itself closed in 2015. The site is now Green Acres Commons, the outdoor shopping complement to Green Acres Mall. The Long Island Marriott hotel now stands on the site of the 110 Drive-In, which closed in 1976.

You must remember these… 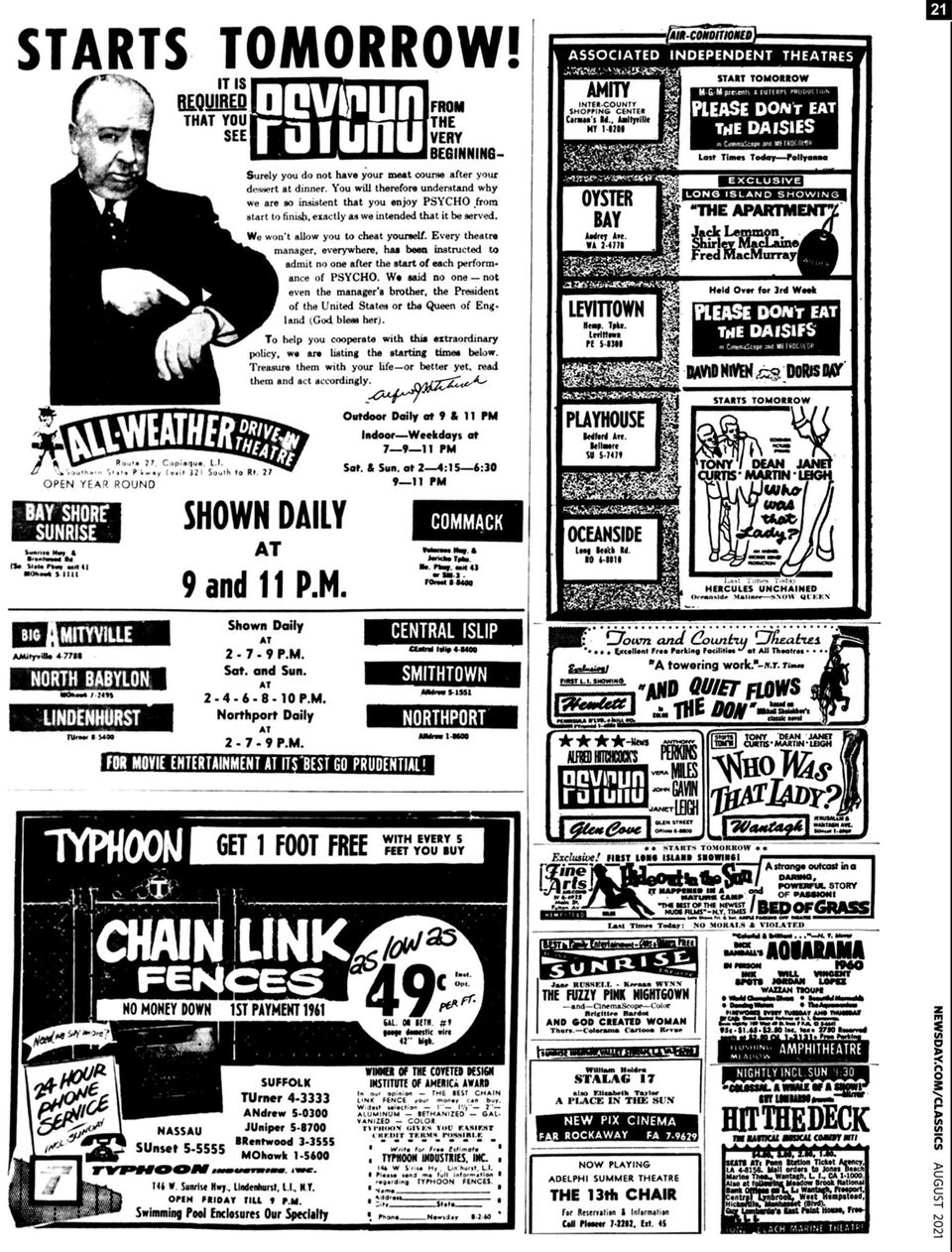 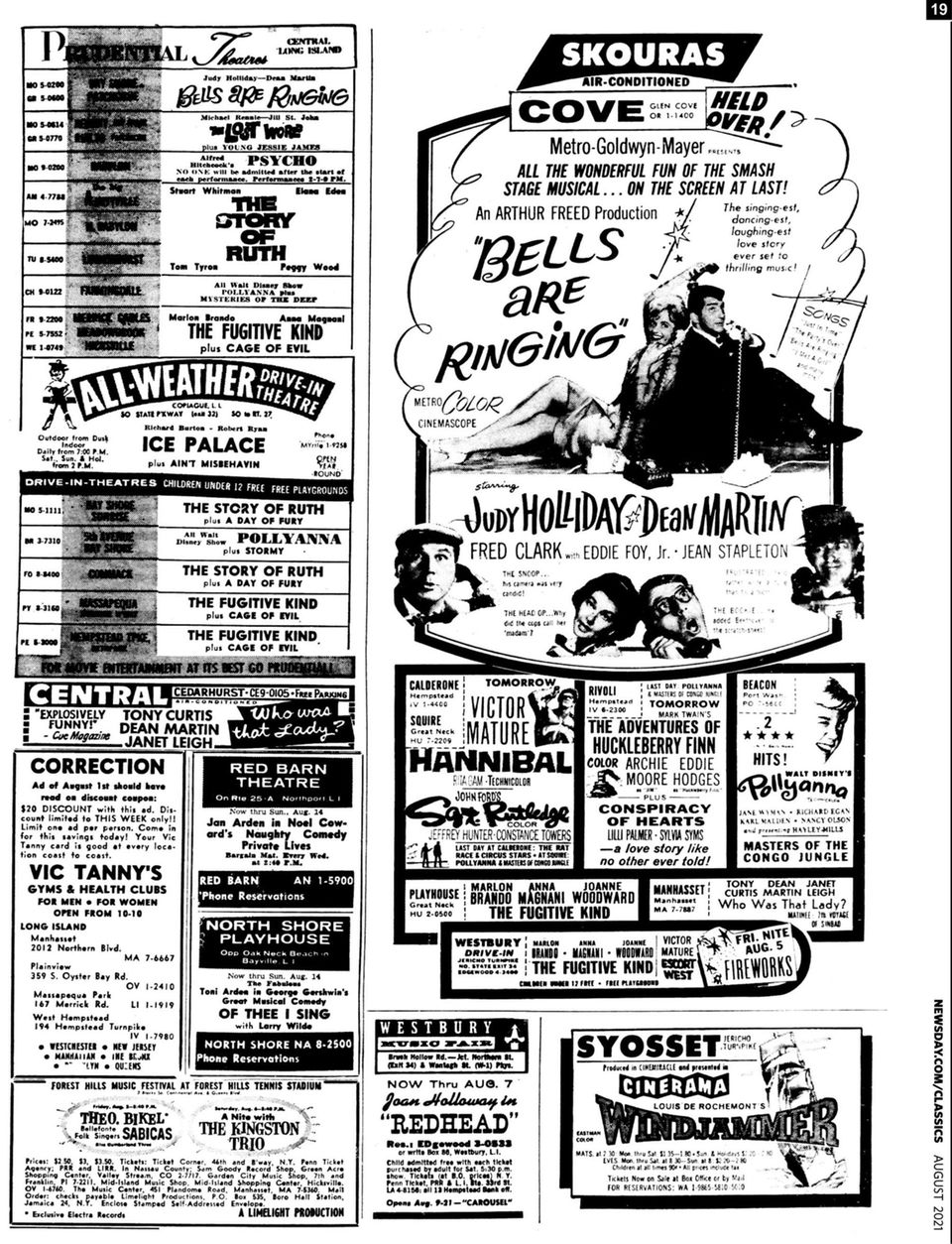 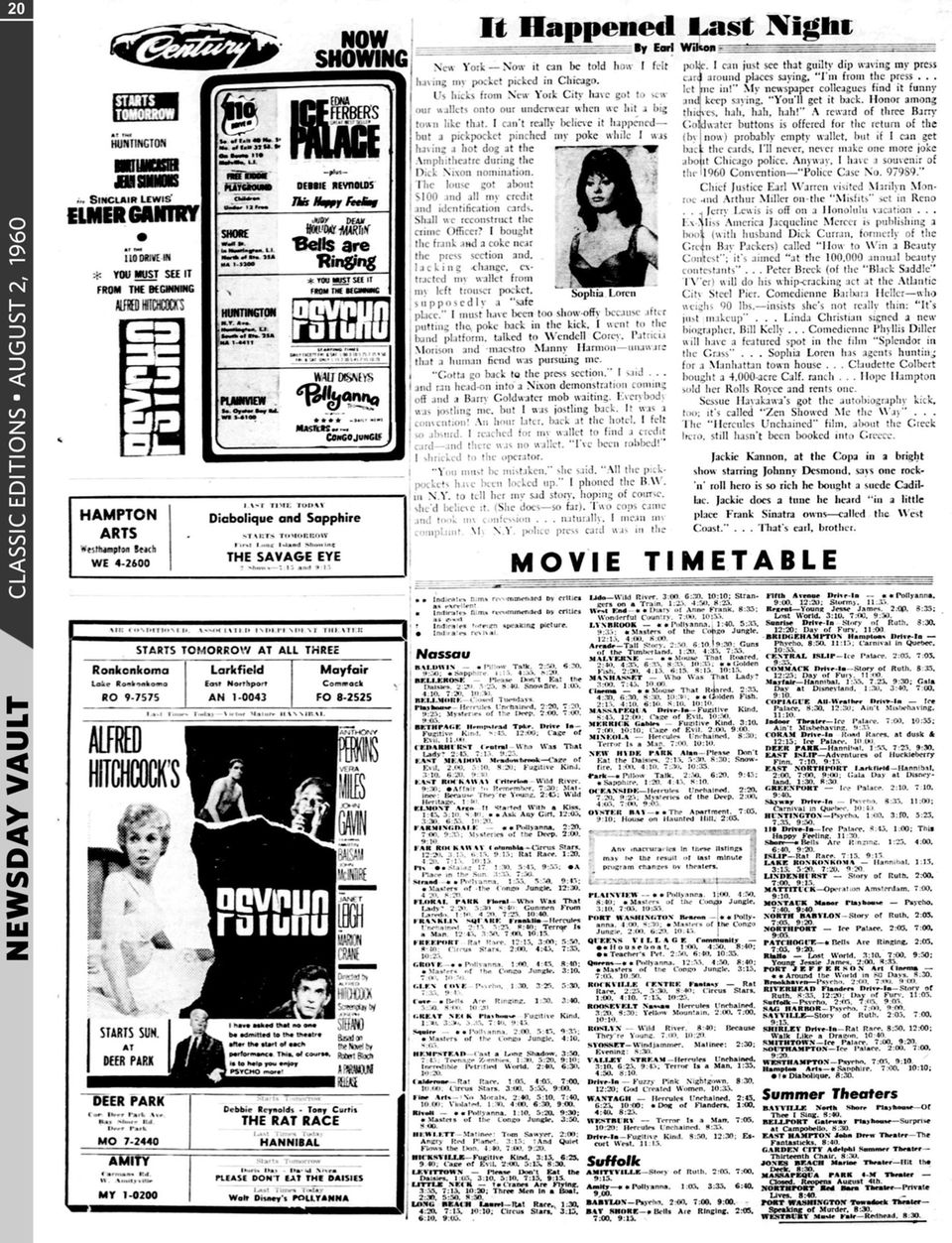